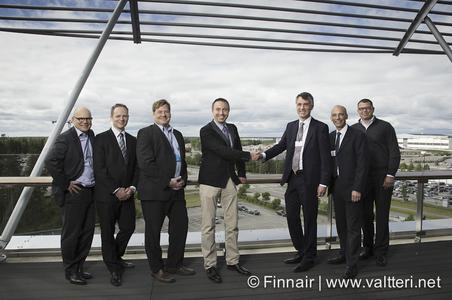 (PresseBox) ( Warburg, 15-06-23 )
For the Material Handling System part of this investment, Finnair has chosen the Lodige Industries Group from Warburg, Germany. Lodige will be responsible for the design, manufacturing and installation including controls and maintenance.

The signing of the contract took place on the 15th June 2015 in Helsinki where the airport logistic specialist from east Westfalia received the major contract. With it's new air freight handling system from Lodige Industries, Finnair Cargo's existing capacity will be more than doubled from 145,000 to 400,000 tons per annum. Philippe De Backer, Lodige Industries's CEO, commented: "The Lodige team is very honoured to be part of Finnair's growth plans. Our state-of-the-art technology will ensure Finnair maintains world class customer standards."

The heart of the logistic system is the storage and transport system for airfreight containers (ULD) and pallets with two 15ft Elevating Transfer Vehicles (6.8ton capacity) as well as a 11 aisle high bay storage system (ASRS) with approximately 2,000 storage positions and 11 Stacker Cranes (1.2ton capacity). The system includes Truck and Airside interfaces, as well as three separate temperature zones for cargo and special goods such as pharmaceutical products and perishable food.

The flight build and break process within the terminal will be managed by using the Lodige warehouse management software "Cargo Professional". Various software plugins will allow Finnair cargo to optimize the efficiency of the operation within the cargo hub.

"We are committed to delivering our valued customers the same peace of mind when transporting belly cargo on Finnair flights than what they enjoy in the cabin. Therefore, we were delighted to find Lodige Industries offering our vision about the warehouse automation and production management solutions in our Helsinki hub. Together with Lodige Industries we want to create a state-of-the-art Cargo Terminal in our home base in Helsinki", says Juha Järvinen, Finnair's Chief Commercial Officer.

Lodige Industries distinguishes it's self from its competition by being the only market player holding all competencies necessary for the delivery of a turn-key Material Handling System. A design department that soley works with the manufacturing division. The in-house software and system design in general being monitored and improved from the experience gained from Lodige's vast range of installed systems worldwide.

The main target of Lodige Industries is to support the freight handler in fulfilling their customer promises. With the "One Stop Shop" approach, Lodige easily provides a high degree of customization.

Completion for 2017 is planned

For Finnair the new freight terminal in Helsinki is the second largest investment after the purchase of the new wide-bodied fleet. "This considerable investment highlights Finnair Cargo's commitment to deliver high quality, efficiently - and to re-think certain operational processes to set the bar higher in this industry.", says Juha Järvinen, Finnair's Chief Commercial Officer

The construction works on the building plot of the 35,000m² terminal have already begun. The laying of the cornerstone ceremony takes place in late June this year, with completion and migration from the existing facility scheduled for spring 2017.

Finnair is the largest Nordic air cargo carrier, transporting 145,000 tonnes of freight and mail annually, with cargo logistics hubs in Helsinki and Brussels as well as an extensive sales team in over 40 countries. Specialized in air cargo traffic between Europe and Asia, Finnair Cargo serves 15 Asian and North American long-haul destinations out of Helsinki, and more than 50 destinations in Europe. With the new A350 aircraft Finnair's long-haul cargo capacity will double by 2020.

The Lodige Industries Group with headquarters in Warburg was founded in 1948 and has independent corporate offices in Asia, Hong Kong, Middle East (Qatar) and many countries within the EU. Currently the family owned company has more than 1000 employees worldwide, of which a third is employed in Germany. Lodige provides material handling solutions for a wide range of industries and specializing in complex Material Handling Systems for logistics operations. The company is the market leader for Cargo Handling Terminals.