In the year ahead, KLM Cargo will be taking a new sorting system for handling express shipments and mail into operation at Schiphol / Lödige Industries will start constructing the system in August 2016 and it is expected to be operational by mid-2017 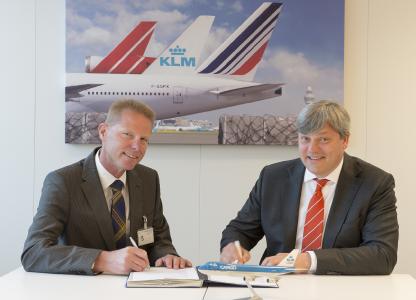 (PresseBox) ( Warburg, 16-08-11 )
Europe's fourth-largest airport, Amsterdam Schiphol is to receive a second terminal and a new pier for up to eleven aircraft. In order to make space for these extensive modernisation measures, KLM Cargo has to give up around 30 per cent of one of its three cargo warehouses. The Schiphol-based cargo airline therefore has no choice but to consolidate how it sorts its incoming express and postal consignments. To enable it to continue to process the cargo effectively despite the reduced space available, KLM Cargo has commissioned Lödige Industries from Warburg, Germany.

The global market leader in air cargo logistics has developed an automated concept for the company, which has seen its surface area dramatically reduced from 13,400 square metres to 6,300 square metres. With this solution, Lödige makes it possible to achieve increased performance with reduced manual operation as well as direct access to the belly carts and unit load devices (ULDs).

More space thanks to horizontal flow plane
The solution comprises of a new sorting system combined with the mechanised transport of the ULDs via powered roller decks. Added to this is the fact that the cargo is stored with the aid of an elevating transfer vehicle, which accommodates the pallets in a high-bay warehouse. “With high-bay warehouse technology, we are opening up the third dimension for belly carts and ULDs. As a result, we have succeeded in maintaining operation over a reduced area,” explains Rainer Leichtweiss from Business Development at Lödige Industries. Another positive outcome from the challenge of limited space is the automated transport of the ULDs and belly carts that are separated right at the hall entrance. The circulation area is significantly reduced compared to transporting the cargo conventionally with trains of dollies.

Innovative solution with the know-how from two experienced partners
A market first, Lödige Industries developed the concept for processing express and postal consignments for KLM Cargo in conjunction with its long-term partner Vanderlande Industries. The market leader in express sorting systems from the Netherlands is to provide the parcel sorting system – a shoe sorter with four entry points and 130 discharge points. The transport system for the ULDs and belly carts, the warehouse for these units including the handling units and the higher-level control system and its interface to the KLM booking system all come from Lödige. “With our modules, we are in a position to establish a custom air cargo logistics system quickly and in a time-efficient manner. The system elements complement each other and guarantee reliable workflows with high throughputs,” states Rainer Leichtweiss.

Scheduled for completion by 2017
In order to make space for the construction of the sorting system in the existing cargo building, since June, express consignments are being processed in temporary facilities on KLM Cargo's site. The demolition works have also already begun. In August 2016, Lödige Industries will start installing the system which will be ready for operation by the middle of 2017. Following the completion of the preliminary phase, KLM and Lödige recently signed the contract for the project.

Headquartered in the German town of Warburg in North Rhine-Westphalia, Lödige Industries was founded in 1948 and has independent offices in Asia, the Middle East, the United States and across many EU countries. The family-owned enterprise currently employs more than 1,000 people worldwide. Lödige supplies materials handling solutions for a broad range of industries and specialises in providing complex material flow systems for logistics tasks. The company is the global market leader in cargo handling terminals.