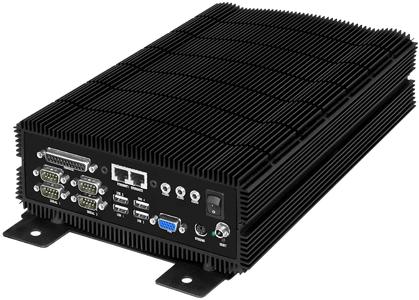 The RuffSystem(TM) 735 is designed for ruggedness and reliability in mission critical applications where other systems would fail, such as military vehicles, transportation control, and field monitoring. The system excels in high vibration mobile applications. Leveraging Ampro by ADLINK(TM) Extreme Rugged(TM) boards and having no moving parts, these systems run reliably for years and years with absolutely zero maintenance. In remote mobile applications, this translates to mission success.

Designed from the ground up for use in harsh environments, the RuffSystem(TM) 735 integrates Extreme Rugged(TM) boards in a complete turnkey general purpose computer system, simplifying the system integration process and improving timetomarket.

The Ampro by ADLINK(TM) MilSystem(TM) 735 (will be available in Q2, 2010) provides the same level of ruggedness as the RuffSystem(TM) 735, but uses MIL-STD-D38999 connectors in place of the standard PC connectors found on the RuffSystem(TM) .Both systems are fanless, designed to meet MIL-STD-810 shock & vibration, and operate at full speed in an extended operating temperature range of
-40°C to 75°C.

The RuffSystem(TM) and MilSystem(TM) 735 are available at competitive prices with Ubuntu Linux 8.04 LTS or Windows® XP Professional preinstalled. The systems also support a full range of additional embedded and desktop operating systems, including VxWorks.

ADLINK strives to minimize the total cost of ownership (TCO) of its customers by providing customization and system integration services, maintaining low manufacturing costs, and extending the lifecycle of its products. ADLINK is a global company with headquarters and manufacturing in Taiwan; R&D and integration in Taiwan, China, and the US; and an extensive network of worldwide sales and support offices.

ADLINK is ISO-9001, ISO-14001, and TL9000 certified, is an Associate Member of the Intel® Embedded Alliance, an Executive Member of PICMG, and a Sponsor Member of the PXI Systems Alliance. ADLINK is a publicly traded company listed on the TAIEX Taiwan Stock Exchange (stock code: 6166).

Beflügelt von der aktuellen Corona-befeuerten Digitaltechnologie-Euphorie stellte Dell Technologies auf der jährlichen Dell Technologies World gleich ein ganzes Bündel von „APEX“-Services vor. Zweiter Schwerpunkt der Veranstaltung waren intelligente Technologien für das Edge. read more
The publisher indicated in each case is solely responsible for the press releases above, the event or job offer displayed, and the image and sound material used (see company info when clicking on image/message title or company info right column). As a rule, the publisher is also the author of the press releases and the attached image, sound and information material.
The use of information published here for personal information and editorial processing is generally free of charge. Please clarify any copyright issues with the stated publisher before further use. In the event of publication, please send a specimen copy to service@pressebox.de.