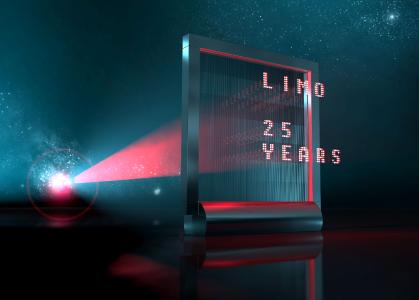 (PresseBox) ( Dortmund, Germany, 17-04-27 )
Whether it's computer chips, flat screens or smartphones, solar modules, medical technology or self-driving cars: Chances are that light or laser technology from LIMO is involved. For a quarter of a century, LIMO Lissotschenko Mikrooptik GmbH has helped shape technological progress as a pioneer of the "light age." In the process, it has provided customers in related key industries, such as semiconductor manufacturing, flat-panel display production, medical device manufacturing and the automotive industry, with the necessary tools for their quantum leaps of technological innovation.

25 years of laser beam shaping made in Germany: Since 1992, global market leader LIMO has continuously delivered technological progress for optical components, beam shaping solutions and application-optimized laser and optics systems – making the company a constant innovative force in industry, business and research for a quarter of a century. Up to now, the potential to increase the speed, efficiency and profitability of industrial production processes with efficient light and laser technology has hardly been realized at all. But LIMO has devoted itself to the determined pursuit of unlocking the rest of this capability. The company's powerful interdisciplinary team is made up of 200 employees from 13 different countries, including 60 scientists and engineers. In addition to its headquarters in Dortmund/North Rhine-Westphalia, which features over 2,000 m2 of clean room space and 10,000 m2 for development, production and application, LIMO also maintains an international network of sales and service partners, as well as a branch office and company-owned application center in China. As a specialist for efficient beam shaping, LIMO provides innovative optics and highly customizable complete laser systems from a single source – from Germany to anywhere in the world.

LIMO is a veritable pioneer of laser technology, holding nearly 300 patents and reinvesting more than 10 percent of revenues in research and development. Thanks to its numerous collaborations with research institutes like Helmholtz Centres and Fraunhofer Societies, national and international universities, and other R&D institutes, LIMO is a trend-setting international player in the field of laser beam shaping. In addition, LIMO also makes innovative contributions through its participation in research networks for the European Union, the Federal Republic of Germany, and the German State of North Rhine-Westphalia. A number of the company's current projects, such as OSLO, Opti-Bond, PHOTONFLEX, Multisurf and Up-LLPC to name a few, rank among today's most important scientific undertakings in the field of photonics.

According to CEO Dr. Guido Bonati, "The secret to our success is the consistent focus on the needs of our customers and partners, who gain access to the key technology for market-relevant innovative advances through our cutting-edge optics and beam shaping solutions. Our goal is to harness the economic potential of laser light and use technology trends to benefit our customers."

Progress at what feels like light speed: Founded in Paderborn, Germany with just five employees in 1992, LIMO would already become the global market leader for refractive micro-optics by 1998. In 1999, LIMO would then expand its range of available products and services to include high-power diode lasers and beam shaping systems for all types of laser sources. In 2004, the company would go on to develop the L3 LIMO Line Lasers®, its very own line laser technology for large surface area processing. LIMO would continue to expand by adding an applications center and in-house process development facilities. In 2008, LIMO then receives the German Business Innovation Award for its groundbreaking beam shaping systems based on free-form micro lenses, and in the process shoots to the top spot on the list of innovative German small and medium-sized businesses. Always at the leading edge of technological development, LIMO would introduce a pilot laser system for scalable large-area surface and coating finishing in 2011 before integrating beam shaping systems for the flat-panel display industry in production lines worldwide from 2012 through 2017.

Now, 25 years after it was founded, LIMO's presence in its anniversary year is stronger and more global than ever before after being acquired by the Chinese company Focuslight Technologies. In 2016, company founder Dr. Vitalij Lissotschenko stepped down from his position as LIMO Group president and shareholder, the new corporate management team now consists of CEO Dr. Guido Bonati and Dr. Chung-En Zah. As a major international player in the development of advanced laser-based production technologies and photonic manufacturing processes for the "light age," LIMO provides key technologies for future trends in fields like mobility, energy and the environment, and communication and the digital world. This makes LIMO an active participant in shaping the future and an important driver of technological innovation in the 21st century, the century of light.

Experience LIMO in our anniversary year: Come visit us at the Laser World of Photonics in Munich, Germany from June 26 to 29, 2017 (Hall B3, booth no. 321) and help us celebrate our big year!

2017 marks an anniversary year for LIMO. For 25 years, LIMO Lissotschenko Mikrooptik GmbH has been an international success story, with the company ranking among the world's leading specialists for laser beam shaping since its inception in 1992. At LIMO headquarters in Dortmund, an international team of 200 specialized experts develops, produces and markets innovative optics and laser systems. LIMO is the world's only company whose core competence profile features the unique combination of micro-optics design, diode laser systems, and materials processing know-how. This makes LIMO an important and reliable partner for companies across various industries - for example, in semiconductor production, the flat-panel display industry, the production of medical devices, and the automotive industry - all of whom are in need of individual laser solutions.