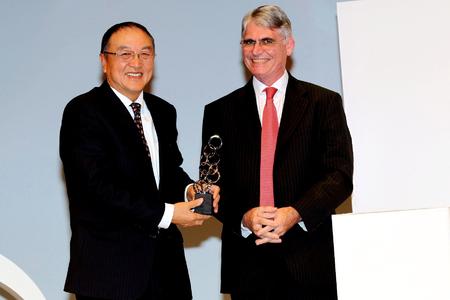 (PresseBox) ( Lyon, France, 10-11-05 )
At the 2010 edition of the World Entrepreneurship Forum held in Lyon (France), Mr. Liu Chuanzhi, Chairman of the Board of Directors of Lenovo Group (HKSE: 992) (ADR: LNVGY) and Chairman and President of Legend Holdings Limited, was today named the Entrepreneur for the World in the 'Entrepreneur' category. The award, created by EMLYON Business School and KPMG, was announced at a gala evening for international, regional and national leaders held at the Palais des Congrès in Lyon. Nominees are selected in a secret ballot by a think tank comprised of 100 leaders from academia, entrepreneurs, politicians and media.

The Entrepreneur for the World award in the 'Entrepreneur' category recognises Mr. Liu's economic achievements and contribution to creating wealth and prosperity for the society. Under Mr. Liu's leadership, Lenovo - originally known as Legend - rose from a small start-up to become the largest personal computer (PC) company in China. Today, Lenovo is the fourth largest PC manufacturer worldwide with 10.2 % market share.

In 2005, Lenovo Group acquired the former IBM Personal Computing Division, and Mr. Liu stepped away from day-to-day management of the company. In February 2009, Lenovo named Mr. Yang CEO and Mr. Liu returned to his chairman position. Since then, the company has reported five consecutive quarters of growth that has outpaced the industry as a whole and three consecutive quarters where it has recorded the fastest growth amongst the top five global PC manufacturers.

The company's financial results, product portfolio and influence have all shown similarly stellar results since Mr. Liu has returned to the chairman role. Much of its recent success can be attributed to Mr. Liu's resurrection of the "Lenovo Way," a core set of key company values built around trust and entrepreneurship. This company culture encourages management and employees to demonstrate "commitment" and "ownership" in their day to day work.

The Making of the Entrepreneur

In 1984, together with 10 other colleagues from the Institute of Computing Technology under the Chinese Academy of Sciences, Mr. Liu founded a new company, which later became Legend and Lenovo.

As an explorer and a practical pioneer in the commercialization of high technology, Mr. Liu has spearheaded the company's efforts to transform innovations into successful products and business models - taking Lenovo to the top in China and among the frontrunners across the world. During China's transformation from a planned economy to a market economy, Mr. Liu has been a strong advocate of transferring China's high-tech research from the labs into real-world products and applications.

About The World Entrepreneurship Forum