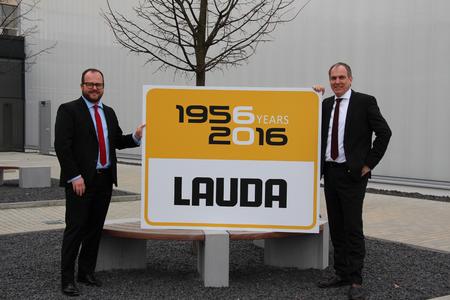 (PresseBox) ( Lauda-Königshofen, 16-03-03 )
At the beginning of March, LAUDA DR. R. WOBSER GMBH & CO in Lauda-Königshofen has a special reason to celebrate: The company, which was founded on March 1 1956, has its 60th. anniversary. Whilst this special historical occurrence of the recurring anniversary today will be celebrated exclusively with the staff on site, there are celebrations planned for the fall including a wider circle and in a public framework.

Exactly six decades ago, Dr. Rudolf Wobser founded the measuring devices factory LAUDA DR. R. WOBSER KG in Lauda, and, in the initial years, he was able quickly to establish the company on the market, especially with innovations of new types of laboratory thermostats in a building-block system and with refrigerating thermostats with mechanical cooling. Some of the other pioneering innovations included industrial systems (1964), measuring devices (1967) and the first thermostats in the world with micro-processor technology (1982).

Based on the ever more comprehensive product range, the company changed its trading name from the founding name to the current name, LAUDA DR. R. WOBSER GMBH & CO. KG in 1989, under which additional new developments and innovations took place, along with steps to extend the available market, for example, the first circulation chiller (1994), the LAUDA Ecoline (1997) and the product category of process thermostats for processing technology at the turn of the millennium.

The company founder Dr. Rudolf Wobser died on June 17 1977 at the age of just 66 years, following a short severe illness. His two sons Karlheinz Wobser and Dr. Gerhard Wobser became personally liable partners. At the end of 2002, the long-serving Managing Director Karlheinz Wobser took retirement. Gunther Wobser was appointed as the new Managing Director, and, until 2010, he guided the family company, together with his father, Dr. Gerhard Wobser, who then took retirement after 39 years.

Particularly in the preceding years, LAUDA DR. R. WOBSER GMBH & CO. KG experienced milestones in the development of the company and its global expansion, such as the foundation of LAUDA France in Roissy near Paris in 2005. Three years later, branches were opened in Latin America, China and the USA. The heating and cooling systems business unit also gained more space for its ongoing growth in 2008 with the new production hall and office building, corresponding to an investment of around 3 million Euros. In 2009, LAUDA presented their equipment offensive at the ACHEMA exhibition, the leading trade fair for laboratory equipment industry. All the employees from the six LAUDA foreign branches met here for the first time at the LAUDA World Meeting.

A year later, LAUDA introduced ECO refrigerating thermostats with natural refrigerants in Europe, which allow the user to make a contribution to the reduction in the greenhouse effect, within a framework of climate protection. In the same year, 2010, they were able to achieve an increase in sales of almost 40 %, and make record sales of 53 million Euros. In 2011, LAUDA acquired a Spanish manufacturer of industrial circulation chillers and continued to operate the production facility at Terrassa in Spain. In the following year LAUDA founded the next foreign company in Birmingham (England).

After a roughly two-year construction period, involving a total investment of 6.2 million Euros, a new logistics center and a new production hall was inaugurated in Lauda in 2013. A year later, the worldwide leading manufacturer of constant temperature equipment, temperature control devices and measuring devices made an additional strategic expansion coup with the purchase of Noah Precision", a specialist developer and producer of thermoelectric constant temperature equipment as a new subsidiary. Also in 2014, LAUDA extended its international presence by the founding of LAUDA Italia, a 100 percent subsidiary, who will take on the task of increased expansion of business in this significant European market. In the same year, LAUDA expanded their management team with Dr. Marc Stricker, who manages the Operations, Research and Development, Information Technology and Quality Management departments, and, in this year, also coordinates the international development activities.

On March 1 2015, the 100 percent subsidiary, LAUDA Scientific, took over the development, sales and service activities for LAUDA measuring devices. In addition to Dr. Gunther Wobser, the company is managed by Dr. Ulf Reinhart as President & CEO. Using his expertise and research competence, alongside his long-term partnerships, the company has been extended by the incorporation of new pioneering technologies and processes - "always bearing in mind the current requirements in the laboratories and production facilities of their customers" as emphasized unanimously by Wobser and Reinhart.

“LAUDA – The right temperature worldwide" – as the 60 year old company slogan has had it for many years. "We want to remain the global No. 1 in this demanding market. This requires excellent processes, continuous innovation and ongoing growth. In addition to our home market in Europe, we want systematically to take advantage of potential in Asia and America" ventured the Managing Director Dr, Gunther Wobser in an optimistic and confident prognosis for the future development of LAUDA DR. R. WOBSER GMBH & CO. KG.

LAUDA DR. R. WOBSER GMBH & CO. KG would already like to invite all interested persons and townspeople to an Open Day on Sunday October 9 in Lauda-Königshofen. Further details will be provided in good time in the daily papers, for example.

- The temperature specialist LAUDA DR. R. WOBSER GMBH & CO. KG was founded on March 1 1956 by Dr. Rudolf Wobser in Lauda, as a measuring device factory.
- Today, the company is the world leading manufacturer of innovative constant temperature equipment and installations for research, application technology and production, and high-quality measuring devices.
- 60 years of experience and the unique product range of compact laboratory thermostats, via industrial circulation chillers up to customer-specific projected heating and cooling systems, having more than 400 Kilowatt cooling capacity mean that LAUDA is the only company that can guarantee their customers (that number more than 10,000 worldwide), the optimum temperature throughout the added value chain.
- At the current time, around 425 staff members are employed by the company, together with its foreign companies, where around 320 of them are located in the headquarters in Lauda.
- The sales of the Group amount to around 65 million Euros.