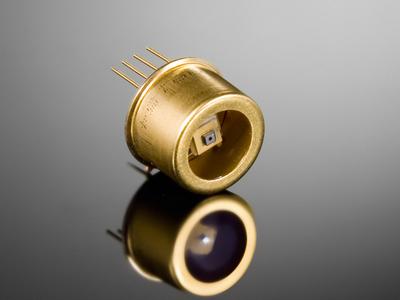 (PresseBox) ( Olching, 13-03-12 )
The detection of the smallest amounts of light is gaining in importance in medical technology and diagnostics. In principle, photon multipliers (PMTs) can be used; however, they are disadvantageously sensitive to magnetic fields and require a high operating voltage. Avalanche photodiodes are particularly suitable: Not only are they cheaper but they also have a compact design, a longer lifetime, a very good time resolution, need a lower operating voltage and are insensitive to magentic fields.

LASER COMPONENTS' SAP500 series is based on a reach-through structure featuring excellent quantum efficiency, extremely low noise, and low dark current. To detect individual photons, the avalanche photodiode is operated in Geiger mode; it is operated at a voltage above the breakdown voltage, VR > VBR. The component has an active area of 500 μm and comes in a hermetically-sealed TO-46 housing - optional with single-stage thermoelectric cooler (TO-37) or two-stage TEC in a TO-8 housing.

The new SAP500 series is particularly suitable for applications in which the weakest light signals, down to the individual photons, have to be quantified and timely resolved. Examples of this include LIDAR, spectroscopy, fluorescence measurement, or photon counting.