Just One Single Supplier in Germany 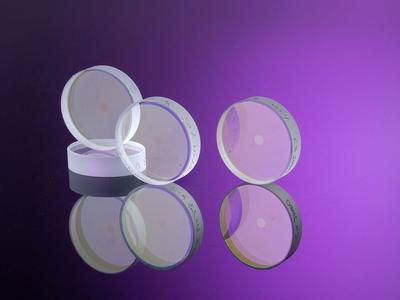 (PresseBox) ( Olching, 12-01-10 )
LASER COMPONENTS is one of the few worldwide manufacturers that can produce Gaussian mirrors. Gaussian mirrors are also known as graded reflectivity mirrors, GRM or variable reflecting mirrors, VRM. The special coating is characterized by a degree of reflecion that falls off in a Gaussian-shaped curve starting from the center of the optics.

Customers can choose almost any shape the Gaussian curve should take. The reflection values in the center range from a few percent to a maximum of 85%. Gaussian mirrors are extremely stable in the laser and suited for high power levels. They are used as output couplers in unstable resonators where they help to reduce the beam divergence at high pulse energies. The components are also used to generate laser beams with a very homogeneous power distribution, which are required for illumination tasks, in material processing, or medical applications. To produce high pump efficiency, Gaussian mirrors are, furthermore, used in frequency-doubled systems.

The coating process of the Gaussian mirrors has been optimized. For that the manufacturing costs have been significantly reduced. Mirrors at 1064 nm, in particular, are available inexpensively at very short delivery times.

LASER COMPONENTS is specialized in the development, manufacture, and sale of components and services for the laser and opto-electronics industries. With sales offices in four different countries, the company has served its customers since 1982. In-house production at six locations in Germany, Canada, and the USA began in 1986 and is meanwhile responsible for about half of its turnover. Currently, the family-run business employs more than 130 people worldwide.