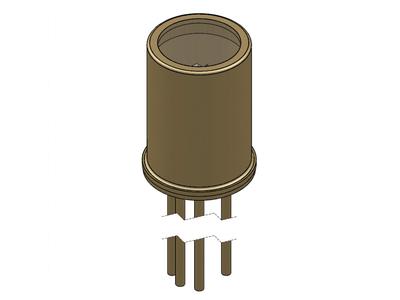 (PresseBox) ( Olching, 12-01-24 )
LASER COMPONENTS presents its new avalanche photodiodes receivers: The H0 series. Supplied in a very compact, modified TO5 housing with a diameter of approximately 5 mm, the H0 series APD receivers can be integrated into small systems with which, for example, distances can be measured or the smallest light signals detected.

The simplest way to use a detector is with an integrated receiver circuit. Here the quality is judged according to the amount of noise produced.

For the entire system, however, the amplifier noise is the dominant source of noise. To reduce the overall noise of the detector/amplifier module, the capacitance connected to the amplifier has to be as small as possible. This is achieved by making the connections as short as possible. With its H0 series, LASER COMPONENTS has developed an APD receiver, with an inherent noise of nearly zero.

LASER COMPONENTS is specialized in the development, manufacture, and sale of components and services for the laser and opto-electronics industries. With sales offices in four different countries, the company has served its customers since 1982. In-house production at six locations in Germany, Canada, and the USA began in 1986 and is meanwhile responsible for about half of its turnover. Currently, the family-run business employs more than 130 people worldwide.