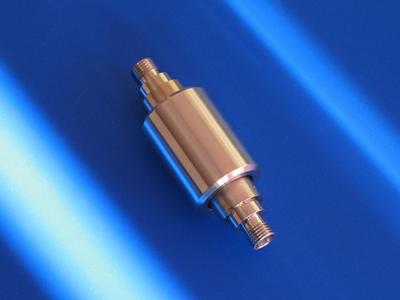 (PresseBox) ( Olching, 14-03-18 )
To connect two SMA connectors with optical fibers, SMA couplers are used in data transmissions. Losses in the optical signal originate at the point of coupling. These losses are not critical in data transmission; however, they can become problematic in applications working with high-power levels: If two SMA connectors that transmit at high-power levels are connected to each other, then these losses can lead to a strong build-up of heat in conventional couplings. This can cause the fiber to burn up in the connector and ultimately lead to its destruction.

LASER COMPONENTS now presents newly developed high-power SMA couplers that offer one solution to this problem. The power that comes from the connector is expanded in the coupler using an optic and then, using a second optic, focused in the fiber of its counterpart. This expansion allows the optical power to be distributed across a significantly larger area.

LASER COMPONENTS specializes in the development, manufacture, and sale of components and services in the laser and optoelectronics industry. At LASER COMPONENTS, we have been serving customers since 1982 with sales branches in four different countries. We have been producing in house since 1986 with production facilities in Germany, Canada, and the USA. In-house production makes up approximately half of our sales revenue. A family-run business, we have more than 160 employees worldwide.