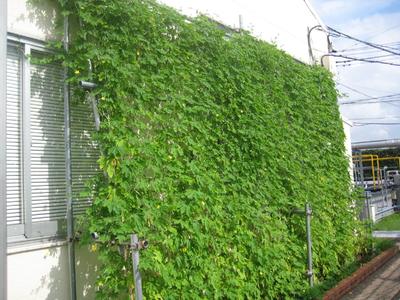 (PresseBox) ( Kyoto / Neuss, 09-08-27 )
The Japanese technology corporation Kyocera, a leading producer in the field of fine ceramic components, is fitting its company premises in Japan out with "green curtains". Placed in front of the office windows, foliage plants climb up trellises until they are fully covered. Closely intertwined, the leaves form a green wall and thus protect the interiors against direct sunlight - preventing the offices from heating up too quickly. This lowers the load on the air-conditioning system, saves energy and thus protects the environment. Planted vegetables spice up the menus in the canteen.

The idea is very simple really: all that is needed for the green curtain is an inexpensive trellis and a suitable plant, such as a morning glory for example. This is enough to shade the Kyocera offices and protect the employees against direct sunlight. As a result, the interior rooms also remain cool during the hot Japanese summer months. Measurements have shown that the temperature on a sheltered outer wall is up to 15°C (27° F) lower than on unsheltered walls where no green curtain has grown. This greatly reduces use of the air-conditioning system in the buildings. The twin positive effects are a saving of energy and a reduction in CO2 due to photosynthesis. What is more, the vegetables that grow are harvested by the employees and prepared as specialities in the works canteen.

Nobuhiko Kitagawa, plant manager at Kyocera: "The green curtain not only helps to save energy but also promotes environmental awareness among our employees.

A particularly popular constituent of the green curtain with the Kyocera employees is the goya plant. It grows well and quickly, has a dense foliage and is delicious. The species of pumpkin it bears is a typical summer vegetable in Okinawa and an ingredient of many popular menus in the canteen.

Headquartered in Kyoto, Japan, the Kyocera Corporation is one of the world's leading manufacturers of fine ceramic components for the technology industry. The strategically important divisions in the Kyocera Group, which comprises more than 200 subsidiaries (April 1st, 2009), are information and communications technologies, products to increase the quality of life, and environmentally friendly products. The technology group is also one of the largest producers of solar energy systems worldwide.

With a workforce of about 60.000 employees, Kyocera posted net sales of approximately €8.68 billion in fiscal year 2008/2009. The products marketed by the company in Europe include laser printers, digital copying systems, microelectronic components, fineceramic products and complete solar systems. The corporation has two independent companies in the Federal Republic of Germany: the Kyocera Fineceramics GmbH in Neuss and Esslingen and the Kyocera Mita Deutschland GmbH in Meerbusch.

The company also takes a lively interest in cultural affairs. The Kyoto Prize, one of the most prominent international awards, is presented each year by the Inamori Foundation, once established by Kyocera founder Dr. Kazuo Inamori, to individuals and groups worldwide for their outstanding human achievement (converted at present €370,000 per prize category).