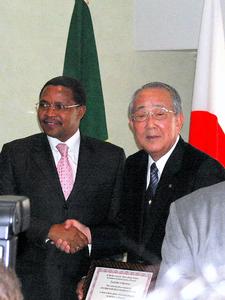 (PresseBox) ( Kyoto/Neuss, 08-07-29 )
By the year 2012, Kyocera Corporation (NYSE: KYO) will have donated solar power generating systems to produce electricity for twenty primary schools in Tanzania. The company has for years been dedicated to electrification and improving educational infrastructure in rural areas in developing countries. This project takes that initiative a step further. At an official celebration, Kyocera's founder and Chairman Emeritus, Dr. Kazuo Inamori, presented the certificate of donation to His Excellency Mr. Jakaya Mrisho Kikwete, President of the United Republic of Tanzania and Chairman of the African Union.

20 Systems in the Next Five Years

One of Tanzania's most pressing problems is improving its educational infrastructure. In primary schools in particular, learning conditions are not yet sufficient. Kyocera - one of the world's leading manufacturers of solar energy modules - is meeting the challenge to improve conditions by lending its support with a package of donations.

Within the next five years, the company will equip free of charge four schools annually with solar energy generating systems. The package includes a 600 Watt solar electricity generation system and the storage batteries that go with it. In addition to the systems, each school will receive basic supplies, including a television and electric lights. The President of Kyocera - Europe, Mitsuru Imanaka, explains the programme, "We hope that electricity will improve the quality of teaching because the newest in media can be used."

Kyocera's commitment to electrifying rural areas began in the Pakistani village of Kankoi in 1983 and the Chinese province of Gansu in 1985. Parallel to that effort, a whole series of projects were completed. Among these were the irrigation of agricultural land, cold storage for vaccines, and providing electricity for medical facilities. In October 2008, Kyocera also plans to equip some 500 households in Tunisia with electricity produced by solar energy generating systems.

More than 500,000 euros for Earthquake Victims

One of the pillars of the company's philosophy is contributing to better social welfare. Everyone involved in the enterprise takes part. After the earthquake in China's Szechuan province, Kyocera donated more than 500,000 euros for reconstruction and humanitarian aid in the effected areas. Of that, some 183,000 euros were donated by Kyocera employees.

Headquartered in Kyoto, Japan, the Kyocera Corporation is one of the world's leading manufacturers of fine ceramic components for the technology industry. The strategically important divisions in the Kyocera Group, which comprises 189 subsidiaries, are information and communications technologies, products to increase the quality of life, and environmentally friendly products. The technology group is also one of the largest producers of solar energy systems worldwide.

With a workforce of 66,496 employees, Kyocera posted net sales of approximately €8.16 billion in fiscal year 2008. The products marketed by the company in Europe include laser printers, digital copying systems, microelectronic components, fineceramic products and complete solar systems. The corporation has two independent companies in the Federal Republic of Germany: the Kyocera Mita Deutschland GmbH in Meerbusch and the Kyocera Fineceramics GmbH in Neuss and Esslingen.

The company also takes a lively interest in cultural affairs. The Kyoto Prize, one of the most prominent international awards, is presented each year by the Inamori Foundation, once established by Kyocera founder Dr. Kazuo Inamori, to individuals and groups worldwide for their outstanding human achievement (€300,000 prize amounts).