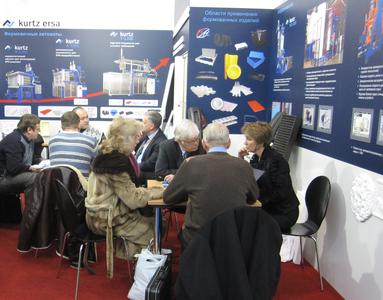 (PresseBox) ( Kreuzwertheim/Moscow, 12-02-01 )
With their business division particle foam machines Kurtz GmbH presented themselves from January 24th to 27th at the fair INTERPLASTICA 2012 in Moscow which is the leading trade fair for plastics and rubber industry in Russia and neighbor states. Fortunately the representatives in the booth of Kurtz could again observe an increasing interest in high tech particle foam machines „Made in Wiebelbach“.

One year ago this business sector in Russia was stuck in a crisis and the interest and project situation was very reserved. This had caused some competitors not to attend this year’s INTERPLASTICA.

This turned out to be a mistake, as the decision makers of nearly every reputed company in the particle foam processing industry from the periphery visited the booth of Kurtz.

Many of them are already satisfied Kurtz customers. They came to push on and substantiate current projects that were stopped during the crisis. However, also some new projects were initiated which may be finalized soon. It seems that the regional processing companies have surmounted the crisis in the meantime and have already been reaching the level before the crisis with their production volume.

This is related to the fact that the automotive industry, that produces in Russia in the meantime, are more and more obliged to produce their components locally. So far the car components ready for assembly have been imported. Car parts like for example bumper cores, sun visors, tool carriers or security-related parts are made of EPP (expandable polypropylene).

For the processing of this material Kurtz offers particle foam machines of the T-Line series in three sizes with a moulding area of up to 2.5 m² and an operating pressure of up to 5 bars. For an energy-efficient and economic production these machines can also be equipped with the SQM/EQM steam and energy measurement system developed by Kurtz. As world market leader of shape moulding machines for EPP processing Kurtz can anticipate an increasing demand in this field for machines for the production of such components in the near future. This trend was also confirmed by present raw material suppliers who anticipate important increases in this market.

A new thermal insulation regulation in Russia is another positive signal for the insulation industry in the country. Thermal insulation and energy savings for new-built houses and also in investment properties are a real issue in Russia with its rich raw material deposits and strong climate fluctuations.

The leading regional manufacturers of EPS insulating panels, better known under the trademark "Styrofoam(R)", have already successfully been working together with Kurtz for years. Many of them had Kurtz plan and produce their plants and rank among the most successful manufacturers in Russia. For the production of insulating panels the EPS material is moulded to blocks with a volume of about 5 m³. Afterwards these blocks are cut to panels in usual sizes. For the efficient production of EPS insulating panels Kurtz delivers, on the one hand, highly productive block moulds, like the models ECOMAT and MONOFLEX with most modern control technology and, on the other hand, cutting machines for precise panel cutting. According to customers the cutting machine Kurtz PRO-LINE is one of the most precise and most productive machines on the market.

In conclusion Kurtz's appearance at the INTERPLASTICA, for the first time in the new corporate identity of the Kurtz Ersa corporation, can be described as very felicitous.

The Kurtz team from Wiebelbach, Germany, was excellently supported by the colleagues of the sales and service subsidiary Kurtz Ost, which was founded in 2007 and has its headquarters in Moscow. Proximity to customers and local presence have always had a high significance at Kurtz and are a strategic factor of the company. This strategy has proved itself even in hard times and is highly appreciated by customers.

Kurtz is very optimistic that requests and projects can be transformed into orders in the near future. The Kurtz Ersa corporation sees itself well-prepared and technologically well-established for the tasks its customers will assign.

The Kurtz Ersa Corporation is an old-established and family-owned German company. Founded in 1779 Kurtz Ersa has developed into an internationally operating conglomerate.

The portfolio is divided into the Business Segments "Electronics Production Equipment", "Metal Components" and "Moulding Machines".

Kurtz GmbH is the group's oldest company and is located in Hasloch and Kreuzwertheim. Its product range covers aluminium and an iron castings as well as machining in the "Metal Components" business segment. Kurtz enjoys an excellent reputation worldwide in the field of particle foam and foundry machines which constitute the "Moulding Machines" Business Segment. In the field of particle foam machines Kurtz offers state of the art pre-expanders, shape moulding machines, block moulds, cutting lines and engineering.

The core focus is on the business areas where Kurtz Ersa can prove to be "Best-in-Class" as compared to third parties. Hence Kurtz Ersa is technological or world market leader in many fields.