Sönke Albers, Dean of Research of the Kühne Logistics University (KLU), has been honored by the European Marketing Association (EMAC) with the 2011 EMAC Distinguished Marketing Scholar Award 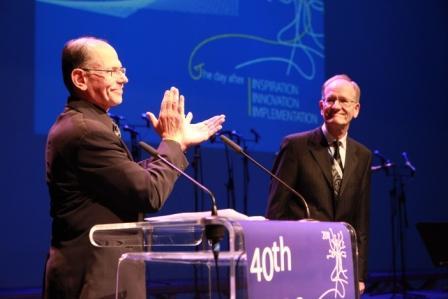 (PresseBox) ( Hamburg, Germany, 11-07-01 )
The award is the highest honor that a marketing scholar who has had extensive connections with EMAC can receive. Albers, who is the first German to receive this award, was chosen by an international panel for his outstanding contributions to marketing research and his role in developing marketing science.

Throughout his career, Sönke Albers has authored close to 200 academic publications, including 73 articles in referred academic journals. Being one of the first German marketing scholars to publish his work internationally, many of his influential studies appeared in top-rated journals such as Marketing Science, Journal of Marketing Research, International Journal of Research in Marketing or European Journal of Operational Research. He has consistently been named one of the best-performing researchers in the German-language area according to the most influential Handelsblatt-Ranking. I.e., he was ranked 8th in 2005 and 7th in 2009, out of more than 2,500 academics in Business Administration, on the basis of scientific publications.

With his academic background originally based in operations research, he became a pioneer of modern quantitative marketing with a clear focus on empirical research, publishing ground-breaking papers especially in the fields of sales management, innovation diffusion and budget optimization techniques. His long list of recognitions include the 2005 Best Papers Award of the International Journal of Research in Marketing and the 2010 Gary Lilien Practice Prize, the most prestigious award for marketing research brought to practice.

As Dean of WHU Vallendar, Dean at CAU Kiel and currently as Dean of Research at KLU, as well as past-president of the German Academic Association for Business Research (VHB), Sönke Albers had a profound impact on the German academic community. He was thesis supervisor for 31 Ph.D. students, many of whom belong today to the leading European marketing researchers, such as Henrik Sattler (University of Hamburg), Manfred Krafft (University of Münster), Bernd Skiera (University of Frankfurt) or Marc Fischer (University of Cologne). In particular for these achievements for the internationalization of the German marketing science community, and his continuous engagement in mentoring junior faculty, Sönke Albers was awarded an honorary doctorate degree from the University of Frankfurt in 2005.

The Kühne Logistics University - Wissenschaftliche Hochschule für Logistik und Unternehmensführung (KLU) is an independent, state-accredited private university located in the HafenCity docklands area of Hamburg and sponsored by the nonprofit Kühne-Stiftung (Foundation). The KLU currently offers master's programs in Global Logistics and Management. What distinguishes them is the international character of the student body, by an optimal staff-student ratio, and by a first-class corporate network. With what will be over 20 professors, The KLU covers all of the relevant areas of teaching and research in the fields of logistics, supply chain and business management. It plans to provide bachelor's, MBA, and Ph.D. programs. The KLU's International Summer Schools offer excellent further education opportunities for professionals. In bundling international teaching and research competence in logistics and business management, the KLU is one of a kind in the world.

For more information about the Kühne Logistics University, visit: