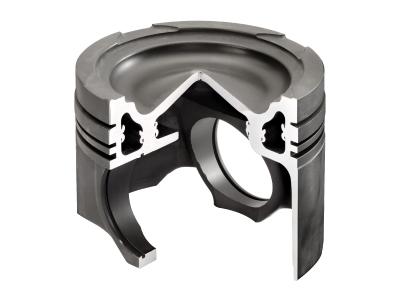 (PresseBox) ( Neckarsulm, 18-11-12 )
In the wake of legislation and a generally sharper environmental awareness, there is worldwide insistence on reducing fuel consumption and emissions not only for passenger cars but also especially for today's economically operating commercial vehicle engines. An important factor in lowering emissions is the reduction of friction losses.

This is where a closely coordinated piston system comprising the piston itself, the piston rings, cylinders, piston pin and connecting rod plays a critical role. In recent years, KS Kolbenschmidt GmbH has repeatedly expanded its systems competence in the area of friction reduction. In the course of simulation tests and on its own inhouse friction test bench with the engine running, the whole assembly comprising the aforementioned parts is fine-tuned in terms of geometries, surface finish, shape and coating to match the required operating conditions. In this way, the various piston designs facilitate individual custom-tailored solutions.

This piston manufacturer is transferring its many years of car experience to commercial vehicle applications. Thus, besides optimized-friction pistons, smooth wire-sprayed cylinder surfaces (RSW coating) have been in series production for some time now. The experience acquired has shown that wire-sprayed cylinder surfaces combined with pistons rings with a hard coating, e.g. of diamond-like carbon (DLC) result in significant friction reduction as is evident in the engine map. KS Kolbenschmidt currently offers this technology in the form of prototypes also for commercial vehicle engines.

These special, very low-friction piston rings are being developed together with alliance partner Riken. Simulations have shown that, compared with current series production, the optimized piston assembly develops around 25 percent less friction at the same low oil consumption. The CO2 savings have been wholly confirmed by an OEM in carrying out consumption measurements on a fully assembled engine for its concept selection model year US'21. The low-weight Weldteks piston for light commercial vehicles has also been optimized for minimum friction in terms of cross-sectional characteristics and piston profile. Rounding off the package is the low-friction Nanofriks shaft coating .

Light-weight piston assemblies
The tribology of the individual parts and their interactive fine-tuning is a complex challenge involving a host of correlations. At present, KS Kolbenschmidt is in the process of verifying the friction reductions by measurements on its own floating-liner test bench. The compact Weldteks piston design additionally opens up the potential of significantly reducing engine weight through a smaller engine block height.

Interplay of piston rings and cylinder
A simulation of the ring-cylinder system has resulted in further progress. In tribometer tests, a combination of thick DLC coating from alliance partner Riken and KS Kolbenschmidt's own RSW coating has shown a faster transition to the hydrodynamic friction phase compared with competitive systems. A check of the optimized production processes confirmed the friction advantages shown in the development phase. In all, the piston ring-cylinder simulation shows some thirty percent less friction and hence that the system plays a major role in lower fuel consumption.

Friction reduction with Crownteks
Further friction-reduction options are provided by the extremely light-weight Crownteks piston specially developed for commercial vehicles by KS Kolbenschmidt and scheduled for series production for the first time in 2018.

This type of piston allows the compression height to be lowered even further for a reduction of the contact surfaces in cylinder component interaction and hence less friction. On the overall piston assembly, the advantages of the optimized cylinder working surface interacting with the low-friction piston rings can be combined.

On both Weldteks and Crownteks pistons, the newest possibilities of optimized piston cooling allow a reduction in the volumes of piston cooling oil required. Hence, the oil pump can be downsized for a further reduction in friction inside the engine.