Production record at the Basque plant 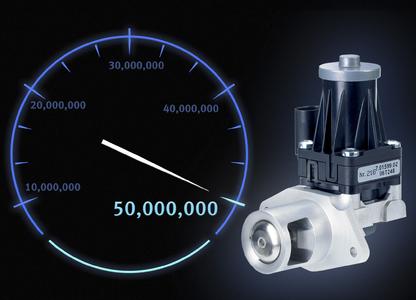 (PresseBox) ( Neckarsulm, 11-01-13 )
Pierburg S.A. at Abadiano in the Basque Country recently produced its 50 millionth EGR valve for gasoline and diesel engines. With a workforce of around 300, this Spanish arm of Pierburg GmbH is the lead-plant for EGR valves of which it has produced some five million annually since 1994.

The EGR valve story at the Abadiano plant began in 1994 with a valve for the Nissan Terrano TD 27 to be followed by gasoline and diesel engine valves for Opel, VW, Renault as well as Fiat, BMW, DC, PSA, and Volvo to name just a few notable OEMs.

"With its exhaust gas recirculation valve Pierburg has consistently responded to the challenges of the market and over the years repeatedly addressed the high quality demands and no less ever tougher environmental standards," sums up Javier Egurrola, head of Automotive Emission Systems and in charge of Pierburg's Basque location.

As the name suggests, the EGR valve regulates the recirculation of exhaust into the engine. The prevalence of this emission-reduction component is therefore above all attributable to ever tighter exhaust gas standards worldwide: since 2005, Euro 4 has been effective in Europe and since September 2009, Euro 5. The strict SULEV standard has applied in the USA for six years now. Many cars complying with Euro 3 already have an EGR system, on autos and starting from Euro 4, this is mandatory. Within this context, EGR and the accompanying valves have been further refined and become an indispensable element of future engine generations. With the advent of Euro 6 in 2014, a new generation of gasoline engine valves will be developed, more compact than its predecessors: the second-generation EMEGR valve.

Pierburg GmbH belongs to the Kolbenschmidt Pierburg Group where it is the specialist for emission reduction. Other elements of the product line-up include first-tier components, systems and modules for air management, solenoid valves and actuators for car and commercial diesel applications. In the market for EGR valves and secondary air systems, Pierburg is #1 in Europe.

Exhaust gas recirculation allows the fresh intake air needed for the fuel combustion process to be mixed with exhaust gas and thus achieve a lower concentration of oxygen in the combustion process. This means that combustion is slower and at lower temperature which, in turn, results in gasoline engine fuel savings and, on diesel engines, reduced harmful nitrogen oxides. Another way to control nitrogen oxides is to recirculate the cooled exhaust. For this purpose, the Pierburg development team has engineered an innovative aluminum EGR module with outstanding long-term cooling effect.

The exhaust cooler is manufactured as a complete die-cast aluminum unit that transfers the heat to the coolant to allow the exhaust temperature to drop down to as far as 600 °C, depending on the engine's operating mode. In doing so, the cooler not only lowers combustion temperature and nitrogen oxide emissions, it also reduces the heat exposure of the downstream engine components.