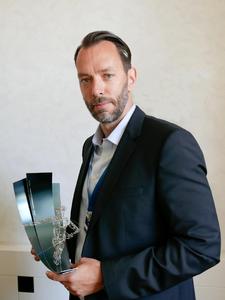 (PresseBox) ( Neckarsulm, 15-06-15 )
The steel pistons for car diesel engines developed by KS Kolbenschmidt GmbH, Neckarsulm, jointly with customer Daimler and cooperation partner Hirschvogel, have received the Steel Innovation Award 2015. At the award ceremony in Berlin, Dr. Alexander Sagel, Head of the Hardparts division of the auto-industry supplier KSPG AG (a member of the Rheinmetall Group), together with representatives from the companies involved, accepted the award from the hands of Prof. Dr. Johanna Wanka, Federal Minister of Education and Research.

After commercial vehicles and racing cars, steel pistons have now found their way into car diesel engines. The first worldwide large-scale series-production use of the award-winning KS Kolbenschmidt GmbH piston has been the V6 diesel of the Mercedes-Benz E-Class (E 350 BlueTEC). And the success story continues. Says Dr. Sagel: "We are currently observing very keen customer interest in this technology. In fact, the plans now being hatched for future generations of European high-duty diesel engines almost all envisage pistons produced from steel."

Steel pistons for car diesel engines are impressive for their high performance and significant reduction in CO2 emissions. Pistons are known to be among the most severely punished engine components. Measures adopted to cut back consumption and the associated CO2 emissions are based on a reduction in friction, improved combustion processes and lightweight materials.

Up to 50 percent of mechanical friction within the engine is caused by the piston and piston/cylinder assembly. In future, the mechanical and thermal challenges facing engine components will rise even further as a result of downsizing strategies such as reduced displacement and a fewer number of cylinders.

With their innovative design and material properties steel pistons are predestined for very compact engines with ample power reserves. Thanks to the material's high strength, steel pistons can be designed with smaller heights and thinner walls than aluminum ones. Thus, the piston's compression height was reduced by around 30 percent for both fitting-space and weight-saving advantages.

Other advantages of steel include its lower thermal expansion (compared with aluminum) and low thermal conductivity. These features, in turn, boost ignitibility and shorten the combustion period. In this way, the engine's thermodynamic efficiency is noticeably enhanced, resulting in appreciable reductions in both fuel consumption and emissions.

KS Kolbenschmidt's steel pistons consist of a forging and are formed using a patented, innovative technique which produces a sealed coolant passage. The resultant thinner wall between the coolant passage and the hot zone of the piston is the key to efficient cooling.

The present award is not the first won by the steel pistons. Last autumn they received the MATERIALICA Design + Technology "Best of Award" for their high CO2 efficiency.

About the Steel Innovation Prize

This was the tenth time the Steel Innovation Prize has been awarded. It is among the most significant competitions of its kind. Altogether 578 entries were submitted this year. There was also a special prize awarded for Climate Protection with Steel. The winners demonstrate the enormous applicability of steel in areas including, but not limited to, architecture and building construction, design, machinery and plant engineering as well as automotive engineering and science.