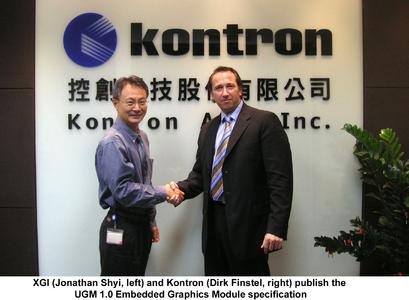 The new UGM standard is an economical option for high-end embedded graphics requiring a short time to market. This is made possible by the use of interchangeable and scalable standard modules. Until now, these advantages were only available from Computer-On-Modules but the UGM standard makes them available to high-end embedded graphics applications as well.

XGI and Kontron have made the UGM graphics module specification freely available to third party vendors. In the future, the specification and use of the UGM brand will be controlled by the forthcoming UGM interest group, whose independent development of the specification will particularly benefit users.

“The launch of UGM as an open standard will accelerate the development of numerous embedded graphics modules; Kontron and XGI have already received expressions of interest from other potential manufacturers”, said Jonathan Shyi, President of XGI Technology.

“UGMs target today’s largest market in embedded computing technology: proprietary design”, said Dirk Finstel, CTO of Embedded Modules Division, Kontron. “We believe that the more open standards become available for modular designs, the more they will fulfill their potential for large unit numbers and large growth: OEMs will become more aware of them and the perception that they are reliable, multi-purpose alternatives to completely in-house development will increase," adds Finstel.

The new UGM standard, which was first unveiled in February at the Embedded World trade show (Nuremberg/Germany), defines an 84 x 95 mm universal Graphics-On-Module, supplying monitors with the most up-to-date range of high-end graphics card signals.

Unlike conventional graphics card that are plugged in at 90 degrees to the baseboard, UGMs are connected parallel to the baseboard. This saves space and thereby allows for extremely flat and very scalable designs. Even more importantly for users, UGMs offer availability of at least three to five years and the graphics functions, including drivers, are particularly quick and easy to implement in custom designs.

UGM cards receive PCI Express signals and video signals via the 220 pins of the connector, which is also used for COM Express/ETXexpress Computer-On-Modules, over 1, 4, 8 or 16 lanes (PEG), and process them – including video capture functions and up to 1 GB of video memory – and then deliver the converted signals back to the baseboard, also via the connector. The UGM 1.0 specification currently supports Dual LVDS, Dual DVI, and Dual VGA as playback sources.

On the baseboard itself, the developer can decide which signal combinations will ultimately be made available to the external connection. Thus, for example, a combination of sound, USB, and DVI can be implemented via the HDMI interface. In terms of the graphics layout and driver development, all the developer has to do is to allocate the appropriate circuits, plugs, and any peripheral components needed for additional features, such as HDCP copy protection for the display of high-resolution, protected video material. The graphics processing core is already finished and all necessary drivers are already implemented.

This design also does away with cables completely. Thus, UGM stands out from current standard graphics cards, in which interfaces are led out via breakout cables because the narrow expansion card slot bracket does not offer enough room for external interfaces. Furthermore, with a 12 to 22 V DC power supply, the UGM specification allows for up to 72 W thermal design power. As a result, UGM can perfectly support even the most high-end games with the highest frame rates and all graphics optimization algorithms.


About XGI Technology
XGI™ Technology Inc., originated from eXtreme Graphics Innovation, was founded in June 2003 and is headquartered in Taipei, Taiwan. XGI™ is a leading visual computing and GPU design company focused on delivering feature-packed GPU specialized in the server and embedded fields. XGI™ has positioned itself as a Fabless IC design company. It offers a full range of video solutions for Server, Embedded and Home-Entertainment applications. For more detailed information, please visit the XGI™ website at http://www.xgitech.com

Kontron designs and manufactures standard-based and custom embedded and communications solutions for OEMs, systems integrators, and application providers in a variety of markets. Kontron engineering and manufacturing facilities, located throughout Europe, North America, and Asia-Pacific, work together with streamlined global sales and support services to help customers reduce their time-to-market and gain a competitive advantage. Kontron's diverse product portfolio includes: boards and mezzanines, Computer-on-Modules, HMIs and displays, systems, and custom capabilities. Kontron is a Premier member of the Intel® Embedded and Communications Alliance. The company is a recent three-time VDC Platinum vendor for Embedded Computer Boards. Kontron is listed on the German TecDAX stock exchange under the symbol "KBC". For more information, please visit: www.kontron.com.