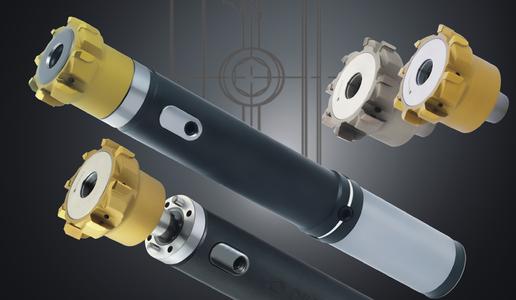 (PresseBox) ( Besigheim, 10-08-23 )
The DIHART Reamax® TS tooling system satisfies the widest variety of demands that users expect in terms of quality and cost efficiency when reaming. The system saves on tooling costs, because of its modular structure and its easily exchangeable reaming heads allow it to be used for a wide variety of components, and its surprisingly good performance is demonstrated, for example, in an extremely long tool life. What is also appreciated at Hermesmeyer & Greweling is the concentricity integrated in the adjustable DIHART DAH® Zero toolholder.

"We have been working with the drilling and reaming tools from KOMET GROUP for many years and seen time and again how they have allowed us to move forward", explains Karl Heinz Greßmeyer, the foreman responsible for production at Hermesmeyer & Greweling. The Marienfeldbased German company specialises in the machining of components used in plant-, mould-, machine- and toolmaking. Greßmeyer explains what he means by moving forward by using the example of the new multiblade DIHART Reamax® TS highperformance reamer which he acquired in the course of machining largesize components for wind power stations. He draws particular attention to torque supports (GGG 40) where the Tooling System is used with a DST (Cermet) 30 millimetre diameter reaming head. A KOMET ABS® hydraulic expansion chuck was used to accommodate the tool and an adjustable DIHART DAH® Zero holder was used to adjust the concentricity. With regard to the tool life achieved, and if considered from a sporting perspective, Greßmeyer's leap forward from a previous 4,350 millimetres to nearly 40,000 millimetres seems positively Olympian. This alone satisfies a central requirement in highperformance reaming and is the primary factor in determining cost efficiency. However, this tooling system possesses several other positive features that must be taken into account.

Exchanging instead of setting and adjusting

The idea behind the DIHART Reamax® TS highperformance reamer is based on the principle of exchangeable reaming heads, as have been familiar for many years from the DIHART® rapid set head(TM) . Instead of setting and adjusting cutting edges, this approach follows the principle of ease of exchangeability, which facilitates the handling of reamers considerably. A prerequisite for this are replaceable heads which have been reliably manufactured to precise tolerances. The highprecision cutoff area with short taper and support face is quite literally a central element. It ensures that the torques generated during reaming are reliably transferred and that the concentricity required for precision machining is maintained. In the DIHART Reamax® TS , the cutoff area is standardised and is thus the basis for the modular design, which represents a further positive feature. Here, one basic body can be used to accommodate reaming heads with differing designs and diameters for all applications. Suitable holder variants are available for the required machine connections and particular length/diameter ratios to which all reaming heads can be adapted. The reaming heads are fastened to the relevant holder by a radial clamping system which allows simple yet secure clamping and releasing operations. Thanks to its modular design, the tooling system can be used for a wide range of components. "In largesize components for wind power stations alone, due to the variation in material prerequisites, there are many different diameters that we can cover, using specially manufactured versions of the Cermet or carbide reaming heads, with always the same system", Greßmeyer adds. With regard to his economic efficiency calculation, he is regards the reduction in the number of tools also as a further positive, along with less setting and adjustments.

Another feature that not only pays off in terms of longer tool life, but is also gained by Greßmeyer in terms of quality and process reliability, is the adjustability of the multiblade tool. The highlevel of quality requirements, in particular with components for wind power stations, moreover necessitate a very precise setting of the concentricity. Hermesmeyer & Greweling are using the adjustable DIHART DAH® Zero holder for this. The holders available as a standard component in the Plug'n ream toolbox from the KOMET GROUP enable you to make µmprecise settings for the concentricity properties. "Concentricity errors can be caused by the machine or spindle or occur through the use of tool extensions, when we have to overcome projecting edges", explains Greßmeyer. As a consequence of the resulting increased load, there was damage in the form of micro cracks, i.e. premature wear that above all in precision machining has an immediate effect on the reaming quality and thus influences the tool life noticeably. Using the adjustable DIHART DAH® Zero holder, concentricity properties can be set with a precision of < 3 µm which is sufficient for the highest demands. The settings can be made inside or outside of the machine, require no previous experience and are completed in just a few minutes.

The benefits of the DIHART Reamax® TS modular tooling system and the use of adjustable DIHART DAH® Zero holders are numerous and cannot always be expressed in exact figures at Hermesmeyer & Greweling. If just the facts about the torque supports are considered, a 1 to 1 comparison of tool life observations shows that nearly 10,000 euros can be saved annually.

With its brands KOMET®, DIHART® and JEL®, the KOMET GROUP is a leading global manufacturer of precision tools for bore machining, reaming and threading. The group has been at the forefront of innovation in the sector for over 90 years - a tradition that began with the early indexable insert borers and continues today with their mechatronic tool systems. The company currently employs more than 1,400 staff in its 20 subsidiaries and is represented in around 50 countries.