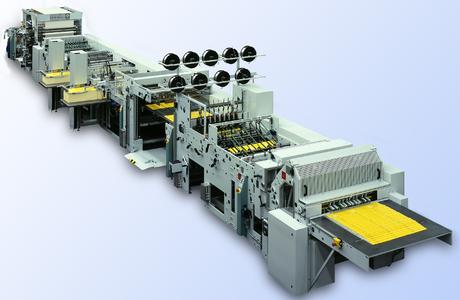 (PresseBox) ( Hamburg/Casablanca, 09-07-20 )
E.C.H. Will, a company of the Körber PaperLink Group, will ship an exercise book line type Alpha RF to Morocco in September 2009. This machine for the customer Manufacture de Papier et Fournitures (Mapaf) is a special model equipped with all available options of an Alpha RF exercise book line and the first one of its kind to be built.

The Mapaf machine is equipped with numerous features that will enable the customer to economically produce high-quality exercise books for the domestic market. For example, it will be operated with two paper webs and has six ruling inkers, enabling three-color flexographic printing. This is necessary for special ruling such as the French Seyès ruling.

In addition, the Alpha RF will be delivered with two cover inserters, which Mapaf needs for the use of high-quality offset covers. The machine can selectively be converted to production with in-line deep pile delivery. The longitudinal perforator enables production of large-size ruled sheets with perforation, which are used, for example, for loose leaf filler and writing pads paper. A station for punched signatures ("Copie Double") and an in-line corner rounding device complete this special version of the Alpha RF.

Up to now Mapaf, one of Morocco's leading manufacturers of office and school supply, has only been able to make basic exercise books. High-quality exercise books have usually been imported from Tunisia. "We can hardly wait for the system to be commissioned," said Mapaf's CEO Jalil Benddane. "With this versatile exercise book line, we finally have production capabilities that will create completely new marketing and sales opportunities in the future."

Negotiations were initiated during drupa 2008. After a visit in Hamburg while the trade show was still on and another visit in Casablanca, the contract was signed. The Alpha RF for Mapaf is a special model that far exceeds the functionality of standard machines of this type found on the Moroccan market. Consequently, Mapaf plans on expanding its market share with the Alpha RF.

E.C.H. Will is a leading supplier of machinery for the paper manufacturing and converting industries. The product range includes cut-size sheeters for the production of communication paper (2-16 pockets), folio-size sheeting machines for paper and board, converting lines for the production of ruled and unruled layers, exercise books and folded sheets in the entry-level, mid-range and high-end markets. E.C.H. Will is part of Körber PaperLink, a system supplier of premium solutions for the paper and tissue industries.