Freescale, QNX, ISaGRAF, and KPA launch "PLC in a Box" 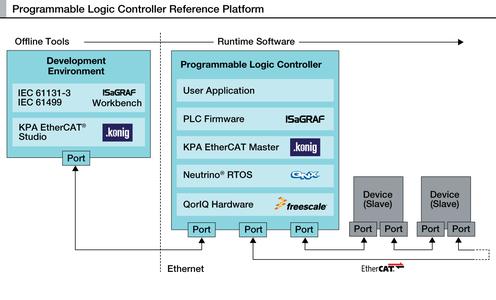 "PLCs automate critical systems that clean our drinking water, process food, create and distribute energy, synchronize transportation and manufacture a multitude of important products. We see PLC demand growing fastest in developing regions," said Alexandra Dopplinger, industrial segment director for Robotics and Automation at Freescale. "This comprehensive new reference platform is based on the latest technology from industrial technology leaders and will speed and simplify creation of advanced PLC equipment."

A demonstration of the PLC solution is on display at the QNX booth during this week's FTF China event in Beijing.

The PLC reference platform delivers millisecond response times for EtherCAT tasks, while using just one percent of one core in the dual-core QorIQ P1025 processor. This leaves ample performance headroom to run both the communications protocol and the control application in a single device. Customers may also choose to distribute processing functions across two cores, or isolate real-time control functions on one core while running maintenance and communications functions on the other core. And for more complex control algorithms, Freescale's QorIQ P1 processor family offers pin-compatible single-core variants for cost reduction, and dual-core variants that scale up to 5,700 million instructions per second (MIPS).

The ISaGRAF PLC Firmware allows developers to easily create feature-rich control systems based on industry-standard control languages such as IEC 61499 and IEC 61131-3. This allows easier migration of existing applications to new platforms based on QorIQ processors and the QNX Neutrino RTOS. ISaGRAF provides a complete control application development environment called the ISaGRAF 6 Workbench, which features plug-ins for features such as IEC 61131-3 compliant languages, an integrated HMI, and the KPA Studio for integrated EtherCAT slave management. ISaGRAF's modularity allows customers to create a customized Workbench, with only the functionality required for their control product.

Pricing and availability The PLC Reference Platform is based on the Freescale Industrial Tower System, available for purchase directly from Freescale and distribution partners for $199 (USD) (suggested resale price).The complete reference platform, including hardware, software and evaluation tools is available now, as described at www.freescale.com/goPLC.

About Freescale Freescale Semiconductor (NYSE: FSL) is a global leader in embedded processing solutions, providing industry leading products that are advancing the automotive, consumer, industrial and networking markets. From microprocessors and microcontrollers to sensors, analog integrated circuits and connectivity - our technologies are the foundation for the innovations that make our world greener, safer, healthier and more connected. Some of our key applications and end-markets include automotive safety, hybrid and all-electric vehicles, next generation wireless infrastructure, smart energy management, portable medical devices, consumer appliances and smart mobile devices. The company is based in Austin, Texas, and has design, research and development, manufacturing and sales operations around the world. www.freescale.com About QNX Software Systems

About ISaGRAF ICS Triplex ISaGRAF is the world's leading automation software partner. The company's flagship product ISaGRAF is fully compliant with both IEC 61499 and IEC 61131 industrial standards, as confirmed by TÜV Rheinland, and can be used to build a variety of automation products including embedded µcontrollers, PAC, PLC, DCS, RTU, CNC and motion controllers. ISaGRAF sustains a high level of standardization, integration and communication within modern automation systems, resulting in high-end, real-time open control systems with crash-proof reliability, powerful performance and flexibility. www.isagraf.com

QNX Software Systems assumes no obligations or liability and makes no representation, warranty, endorsement, or guarantee in relation to any aspect of any third-party products or services.

Mit der Abschaltung der ISDN-Anschlüsse durch die Deutsche Telekom sind Cloud-basierte Telefonanlagen stark in den Fokus gerückt. Welche Fragen sollten Unternehmen vorab klären, um den Weg in die Cloud reibungslos zu meistern? read more
The publisher indicated in each case is solely responsible for the press releases above, the event or job offer displayed, and the image and sound material used (see company info when clicking on image/message title or company info right column). As a rule, the publisher is also the author of the press releases and the attached image, sound and information material.
The use of information published here for personal information and editorial processing is generally free of charge. Please clarify any copyright issues with the stated publisher before further use. In the event of publication, please send a specimen copy to service@pressebox.de.