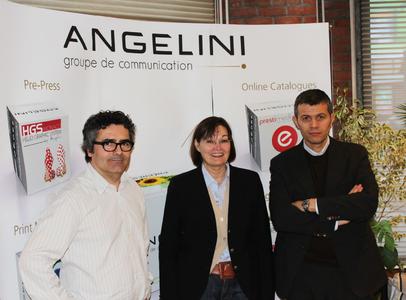 (PresseBox) ( Geneva, Switzerland, 11-06-14 )
The Angelini Group is using the KODAK INSITE Prepress Portal System and KODAK MATCHPRINT Virtual Proofing Systems at the heart of its combined virtual proofing and remote submission/approval offering. The investment has paid off, with the distance selling and e-commerce giant, the Redcats Group, opting to use the service.

The Angelini Group specialises in design and prepress services for the distance selling and large-scale distribution sectors. Throughout its 35-year history, the 100-strong communications company has developed its repro offering, gradually integrating a design studio, a photo and video studio, electronic prepress sites, a technology monitoring cell and a print management unit to help customers with print subcontracting.

A trailblazer in remote customer collaboration

While the Angelini Group does not provide any in-house printing, platemaking or cylinder setting services, file preparation remains a key consideration. For this purpose, almost ten years ago, the company acquired a KODAK PRINERGY Workflow System, together with the collaborative workflow tool, KODAK INSITE Solutions. "Getting to grips with prepress, and especially colour management, right through to producing digital files that comply with our printing partners' specifications, is very important for us," explains Diego Jannelli, manager of the Angelini Group's Monaco production site. "So too is our ability to co-ordinate activities across several sites."

In 2005, the Group became one of the first companies in Europe to acquire the KODAK MATCHPRINT Virtual Proofing Option. "We invested in the concept of soft proofing on a calibrated screen at a very early stage," continues Jannelli. "The potential offered by this technology quickly convinced us."

This strategy paid dividends in 2010, when the Redcats Group conducted an internal audit as part of a cost reduction plan. After completing its audit, the distance-selling giant decided to adopt the virtual proofing and remote collaboration service offered by the Angelini Group. "The leading distance-selling companies have catalogue production cycles that involve large page volumes and very short lead times," explains Philippe Dubois, manager of the Angelini Group's northern division. "This means production is shared between prepress service providers and printing houses commonly spread across France, Italy and Germany, and involves frequent shuttling of proofs between various sites. Digitising these proofs has helped to significantly shorten production times. Moreover, eliminating hard proofs and streamlining the production process via a collaborative workflow system improves efficiency throughout the entire chain."

KODAK Solutions at the heart of production

"In addition to our multi-site collaborative workflow and virtual proofing experience, the Redcats Group chose our system because of the quality afforded by the KODAK Technology," says Dubois.

Today, the Redcats Group's production workflow is handled on the Angelini Group's servers, from processing images, catalogue pages and direct mail documents, including presenting proofs on calibrated screens, through to producing print-ready proofs for the printing house. "The system brings us real-time savings on imaging deliveries," says Sandrine Boulanger, a layout artist in the Redcats Group's imaging and communication division. "We also have the benefit of traceability for corrections and efficient handling of successive proofs. The system is a real asset."

Redcats has already processed several projects in this way, and the company plans to switch its entire production to virtual proofing in the future. Potentially, this could affect 340 users across several countries.

The Angelini Group is continuing to promote its collaborative workflow and soft proofing solution, which has since won over two more noteworthy customers - Damart and Camif Collectivités.

As the world's foremost imaging innovator, Kodak helps consumers, businesses, and creative professionals unleash the power of pictures and printing to enrich their lives.