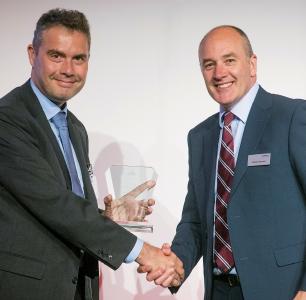 (PresseBox) ( Munich, 17-08-01 )
The Hitachi Rail Partners Day, hosted by Alistair Dormer, Vice President and Executive Officer in charge of the Rail Business and Executive Chairman and CEO of the Board Hitachi Rail Europe, took place in June in London and celebrated and recognized excellence across all areas of the train builder’s supply chain.

This year, Knorr-Bremse was honored by being presented with the Hitachi Rail Best Contribution to Value Generation Award for the supply and support of systems to Hitachi Rail for its global rail project applications. The Award was accepted on behalf of Knorr-Bremse by Dr. Jonathan Paddison, Senior Vice President Sales & Systems Rail Systems at a glittering event held at the Park Plaza, Westminster Bridge. The prestigious awards are only given to the very top performing suppliers of Hitachi Rail, from among the hundreds supplying the organization’s facilities in Italy, the UK and Japan. The Hitachi Rail Supplier Award is established as the vehicle manufacturer’s highest supplier accolade. It recognizes suppliers who have made a significant contribution to the success of Hitachi Rail vehicle projects through delivering outstanding support, technology, delivery and quality.

Knorr-Bremse is now a major supplier of systems for the new Hitachi Rail trains being produced in Europe. In Italy, Hitachi Rail Italy is building 300 stylish Rock double-decker trains at its facilities at Pistoia, Naples and Reggio Calabria. The trains will run on regional routes and be operated by Trenitalia and are all equipped with Knorr-Bremse braking technology. The support given by Knorr-Bremse to this development is quoted as one of the main motivations for the award. In the UK, Hitachi Rail Europe is building new fleets of intercity trains at their state-of-the-art manufacturing facility in Newton Aycliffe, County Durham. The new intercity trains will operate on the UK’s long-distance routes, including the Great Western and East Coast Main Lines.

The trains will all be equipped with Knorr-Bremse braking technology. Commenting on the award, Jonathan Paddison said, “I was honored to accept the Hitachi Rail Best Contribution to Value Generation Award on behalf of Knorr-Bremse. Hitachi Rail is establishing an extremely successful presence in the European rail transportation market and we are proud to be part of their success and to be recognized as such.” Mark Cleobury, Member of the Knorr-Bremse Rail Systems Management Board, added, “The Award demonstrates that our people and our technology are delivering real benefits for our customers and that we truly create added value both in supporting the production of high-quality, reliable, cost-efficient vehicles and throughout the vehicles’ operational life-cycle.”

Knorr-Bremse is the leading manufacturer of braking systems and supplier of additional sub-systems for rail and commercial vehicles, with sales totaling approximately EUR 5.5 billion in 2016. In 30 countries, some 25,000 employees develop, manufacture, and service braking, entrance, control, and energy supply systems, HVAC and driver assistance systems, as well as steering systems, and powertrain and transmission control solutions. As a technology leader, through its products the company has been making a decisive contribution to greater safety by road and rail since 1905. Every day, more than one billion people around the world put their trust in systems made by Knorr- Bremse.