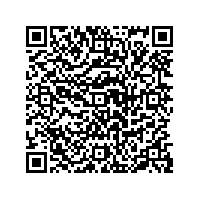 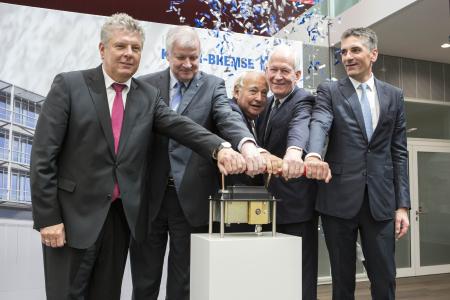 (PresseBox) ( München, 16-06-23 )
After nearly two years of construction work, the Knorr-Bremse Group's new Development Center in Munich was officially opened on June 23, 2016 in the presence of Bavaria's Minister President Horst Seehofer and the Mayor of Munich, Dieter Reiter, together with large numbers of guests from the worlds of politics and industry.

"Knorr-Bremse's new Development Center is futuristic in many respects: Its sophisticated technical infrastructure brings together engineers and technicians from both divisions - Rail Vehicle Systems and Commercial Vehicle Systems. Such a concentration of brake-related expertise generates synergies and increased added value for our customers," said Klaus Deller, Chairman of the Executive Board of Knorr-Bremse AG. The aim is to develop braking solutions that offer customers greater product and operational safety, enable them to comply with strict regulations, reduce the total cost of ownership, and open up opportunities to embrace new business models.

On a total floor space of 17,000 square meters distributed across five levels, the new building houses 100 state-of-the-art rigs and systems for technical testing and quality assurance as well as workplaces for 350 engineers and technicians. "First-class technology will enable our engineers and technicians to develop and test new cutting-edge systems for tomorrow's rail and commercial vehicles. The Development Center is the biggest single investment in the history of Knorr-Bremse and as such is a clear statement of our belief in Bavaria as a technology hub. Munich is the main center for our systems competence and from here our innovations will drive forward the development of rail and road transportation all over the world," continued Mr. Deller. Knorr-Bremse has invested a total of EUR 90 million in the Development Center, which was completed and put into operation in less than two years.

"For a region like Bavaria, which has few raw materials, research and innovation are the key to remaining competitive and ensuring the prosperity of generations to come. With this state-of-the-art facility Knorr-Bremse is investing in the future and setting an example for other companies," said Bavarian Minister President Horst Seehofer. "Here in Bavaria we need more such core investments by large companies if we are to strengthen and safeguard our industrial base. Innovative manufacturers provide the foundation for Bavaria's future prosperity. Knorr-Bremse is demonstrating how we can face up to global competition and expand our region's knowledge base. We want to be a modern, digital industrial hub, and are determined to further fine tune our technology promotion accordingly."

The Mayor of Munich, Dieter Reiter said: "Munich has a reputation as an innovation hub that stretches far beyond the borders of Bavaria. This development center is a further landmark in the innovation landscape and underlines the bright future the city has as a center for industry."

Heinz Hermann Thiele, Honorary Chairman of the Supervisory Board and the proprietor of the company, commented: "As a family-owned company we have always operated with an eye to the future. The new Development Center will set the pace for Knorr-Bremse's further expansion of its innovative capabilities worldwide. Since 2010 we have invested more than EUR 1.5 billion in developing new products and systems. And during the same period the Group also secured its future by spending over EUR 1.3 billion on establishing and expanding development and production sites around the world. All this investment has given the company a clear technological lead over its competitors."

More than 3,500 Knorr-Bremse employees around the world work in the field of development, and the workshops and laboratories at the Munich Development Center are home to some 350 experts in engineering, testing and materials science. Flooded with natural light, the central atrium provides an ideal space for communication and the exchange of ideas. As Prof. Dr. Gunter Henn, chairman of the prestigious architectural practice Architekturbüro Henn, which was responsible for planning and implementing the project, explains: "Nowadays, companies are not just places where knowledge is applied - they are increasingly places for generating new knowledge. Interaction between staff members produces new insights, and the architecture of the Development Center actually encourages this process. What is important is not so much the knowledge of the individual disciplines but rather the creation of a space for inter-disciplinary exchange and networking between the various experts. The design of the interior and the way the space is used is based on our innovation process, and the staff are provided with the very best working conditions for each phase of this. The close vicinity of the offices to the workshops and labs also means that researchers can rapidly try out and test their ideas and applications."

In addition to supporting the innovation process, the design of the Development Center is also based on sustainable principles, with the heat generated by the test rigs used to provide central heating for the building.

Knorr-Bremse has created a basis for developing systems that generate added value for its customers. The state-of-the-art test rigs and equipment enable technical ideas for rail and commercial vehicles to be rapidly validated and transformed into products for the customer, significantly reducing time to market.

The aim is to develop the next generation of braking systems for rail and commercial vehicles in response to future requirements. In the rail division, for example, the Knorr-Bremse development engineers are currently working on innovative solutions that enable precise, low-wear braking of trains irrespective of their load or the weather conditions. This will enable trains to operate more punctually and at shorter intervals.

In the commercial vehicle division, a new generation of Knorr-Bremse brake control systems is being designed to cope with complex control functions related to the increased use of driver assistance systems and automation of vehicle drive functions as a further step towards driverless vehicles. Intelligent networking of the brake control systems with other subsystems such as the steering enables Knorr-Bremse to offer further automated functions such as active lane control (hitherto confined to automobiles) and also new truckspecific functions such as platooning - trucks travelling close behind each other in automatically controlled convoys - or automated yard maneuvering.

They come with different names, such as ATLAS or UZP, but every one of the 100 test rigs is an outstanding example of state-of-the-art engineering. A building with such a combination of testing equipment and collaborative development work by the rail and truck divisions offers an ideal basis for dealing with the complex requirements of the sector. The technical highlight of the machine park is the ATLAS test rig.

The Advanced Test Laboratory for Adhesion based Systems is 15 meters high, weighs in at 760 tons, and simulates track operation of running wheels, wheelsets or bogies at speeds up to 350 km/h. The rig can simulate all track gauges and a range of operating conditions such as rain or turbulence as well as different ambient temperatures. The Universal Train Test Rig (German abbreviation: UZP) is no less impressive in technological terms. Capable of simulating the braking of entire passenger and freight trains more than 3 kilometers in length and with up to 208 cars, it has a main air pipe that is configured in a giant spiral. The rig can be used for testing and homologation according to a variety of different international rail standards. Another test rig is the inertia friction dynamometer, which is used to simulate emergency braking and test commercial vehicle brake discs for distortion and cracking. Finally, Knorr-Bremse's use of an NVH (Noise, Vibration and Harshness) dynamometer makes the company a pioneer in the field of road freight noise reduction. 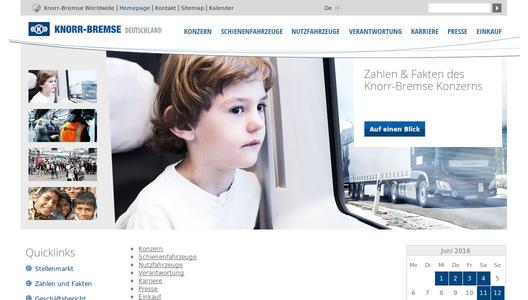