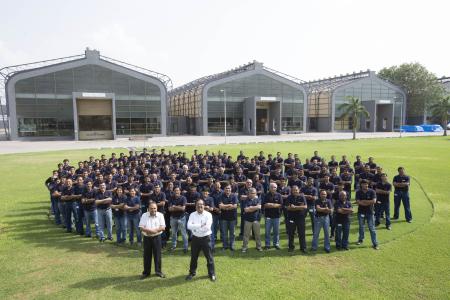 (PresseBox) ( Dortmund, 17-02-01 )
With immediate effect the KHS Group’s production sites are now certified according to the new, revised ISO 9001:2015 standard. The current 2015 standard replaces the ISO 9001:2008 norm previously in widespread use. The KHS factory in Ahmedabad in India has been awarded the certificate for the first time. TÜV Rheinland Cert GmbH has now confirmed a uniform standard at all KHS production locations, giving customers of the manufacturer of filling and packaging systems the world over extra assurance.

“We’re extremely pleased about the successful expansion of the group,” smiles Hans-Joachim Peinemann, head of Quality Management at KHS. It is perfectly normal to have individual sites audited, he continues, but being certified group-wide is “very special”. In addition to its German production sites in Dortmund, Bad Kreuznach, Kleve, Hamburg and Worms the KHS Group also manufactures its plant engineering in Ahmedabad (India), Waukesha and Sarasota (both in the USA), São Paulo (Brazil) and Zinacantepec (Mexico).

Customers and employees benefit
ISO 9001 stipulates the requirements made of a company-related system of quality management, the fulfilment of which acts as proof of conformity with defined standards. The practical application of these standards is verified by audits performed by an independent certification body. In the new, revised edition of the quality management standard from 2015 there is now an even stronger focus on continuous improvement and process and customer orientation.

Tested and verified worldwide
Standards which are usually easier for Europeans to adhere to can present something of a challenge on a global scale. “The project proved to be quite demanding at some sites. Other non-German plants have already been certified for years,” states Peinemann. He describes certification as a process which takes several years. ISO 9001 confirms that high standards are applied internationally. “Customers like to know for certain that they can rely on certain quality criteria. This certificate objectively confirms the KHS Group’s good system of quality management worldwide,” explains the QM expert.

Employee motivation has also increased following certification, he adds. Appearing together before a German TÜV auditor has internally heightened awareness of the common aspects the group shares. “For some of our factories it was like being presented with an award,” says Peinemann. For him, however, the standard is just one stage of many. “In the future we don’t just want to keep this standard but to build on it.” There will be time to do just that as the current certification is valid until 2019.

Supplementary certificates in Germany
The external auditors from TÜV Rheinland Cert GmbH have also attested to a uniformly high standard being upheld in energy, environmental and occupational health and safety management at all German KHS production sites. The latter are not only certified according to ISO 9001:2015 but also to ISO 14001:2015, BS OHSAS 18001:2007 and ISO 5001:2011.

The KHS Group is one of the leading manufacturers of filling and packaging systems for the beverage, food and non-food industries. The KHS Group includes the following companies, among others: KHS GmbH, KHS Corpoplast GmbH, KHS Plasmax GmbH and NMP Systems GmbH.
KHS GmbH manufactures modern filling and packaging systems at its headquarters in Dortmund, Germany, and in Kleve, Bad Kreuznach and Worms. The KHS Group's PET expertise is pooled at KHS Corpoplast and KHS Plasmax in Hamburg, Germany, where light PET packaging and innovative coating systems are developed and produced. NMP Systems GmbH, a wholly-owned subsidiary of KHS GmbH based in Düsseldorf in Germany, designs and markets new, resource-saving packaging systems for PET bottles.
The Group has an international production and service network. In 2015 KHS was awarded the Top 100 seal of approval for exceptional innovative power and outstanding innovative success among German SMEs. In 2015 the KHS Group and its 4,871 employees achieved a turnover of around €1.17 billion within the Salzgitter consolidation. The companies in the KHS Group are 100% subsidiaries of the MDAX-listed Salzgitter AG corporation.

High-tech in the mountains