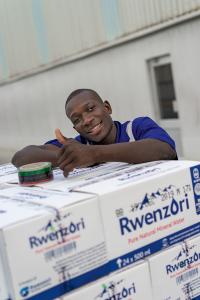 (PresseBox) ( Dortmund, 20-07-21 )
With the help of high-quality, efficient KHS technology the sales of packaged water in Uganda are climbing to ever new heights. Awareness of the responsible use of resources is growing – an example that could set a precedent.

At 5,109 meters above sea level Margherita Peak in the Rwenzori Mountains in northwestern Uganda is Africa’s third-highest mountain. For many mountaineers the massif is considered the more attractive alternative to the relatively overcrowded Kilimanjaro. Despite its location right on the equator the surrounding peaks are glaciated – still. The region, a particularly lush and species-rich habitat for African flora and fauna, was declared a UNESCO World Heritage Site in 1994 for its ecological significance. The misty rain forests with their protruding, sometimes bizarre crags create a mystical aura. The up to 3,000 millimeters of rain per square meter that fall here every year form many rivers, some of which are tributaries of the White Nile.

It’s therefore no surprise that – in the company’s own words – one of Uganda’s best and largest mineral water brands was named Rwenzori and depicts the mountain range on its logo. The product is bottled nearly 300 kilometers from Margherita Peak in Namanve in the greater Kampala area of the Ugandan capital. When the Rwenzori Bottling Company began operations in 1993, it faced the challenge that bottled water was still a relatively new and unknown product to many people in Africa. This has changed a lot since then: the sale of bottled water has literally skyrocketed throughout Uganda, especially in urban centers – and even today annual growth rates are still at 10% and more. This development has been precipitated by the growing awareness that this water is safer to drink than tap water, better in quality and a brand with a long tradition.

This is a claim Rwenzori makes in particular regarding its Pure Natural Mineral Water product: predominately middle- and upper-class consumers value this still water highly which they find compelling with its good taste, balanced mineral content and absolute bacteriological purity. They are also willing to pay a higher price, which is around 30% more than that of the competition. Accordingly, the expectations regarding the packaging of this premium product bottled in PET are high. Rwenzori even makes its own bottle caps.

In 2014 the Rwenzori Bottling Company was acquired by Coca-Cola Beverages Africa (CCBA) which operates in South and East Africa. Part of the new strategy is to locally integrate well-known mineral water brands into their own group in order to develop them further. Targeted marketing measures can effectively exploit the growth potential – in addition to Uganda this is already happening in Kenya, Ghana and Ethiopia.

Rwenzori also has plans for further growth of ist water brand which already has gained an approximately 65% share of the Ugandan market. However, there’s no more space available for a new production line at the main plant where three smaller bottling lines are in operation. Instead, operations are to be expanded on the site belonging to CCBA subsidiary Century Bottling Company just a few hundred meters away. The group is investing a total of US$10 million – about two-thirds of Uganda’s planned budget for 2018.

KHS was awarded the contract for the new PET line. In addition to an Innoket Neo labeler the package includes an InnoPET BloFill stretch blow molder/filler block with a capacity of up to 25,000 500-milliliter bottles per hour. “This is the second water bottling line that CCBA will be receiving from us within a very short space of time,” says Denise Schneider-Walimohamed, managing director of KHS East Africa. “Last year we installed an almost identical line at Voltic in Ghana. Until now many customers in the region have actually associated KHS with higher-capacity machines outputting up to 80,000 bottles per hour. With these two projects we’ve been able to prove that KHS also offers excellent water bottling systems in the low-capacity range.” All capacity levels are now in demand in Africa and most water bottling systems are sold in the KHS Middle East/Africa Market Zone managed by executive vice-president Markus Auinger.

The company was particularly impressed by the Innofill PET NV water filler – the first machine designed for still water that Coca-Cola Beverages Africa in Uganda has acquired so far. The Dortmund systems supplier has chalked up points with other projects KHS has also implemented for CCBA in Uganda including a PET line for carbonated Coca-Cola soft drinks installed in Mbarara in 2015. “Our experience with KHS has been very good. We know that we can rely on short delivery times, fast installation and commissioning and the expert support and flexibility of the KHS team,” explains Edward Ojede, project manager at CCBA in Uganda.

Particularly noteworthy is the support provided by the KHS experts in the company’s Bottles & Shapes™program who contribute their expertise in the development and optimization of bottles. Their consultancy service produces PET bottles which have been optimized in terms of both ecology and economy and boast 100% line suitability and compliance with the customer’s design concepts.

Although the line was officially commissioned in May 2019 by the president of Uganda, represented by the minister of trade, industry and cooperatives, production has been running since the beginning of the year – and very smoothly at that. The performance figures of the new system have even exceeded CCBA’s high expectations. “We’re achieving a line efficiency of 98%,” says Conrad van Niekerk happily, managing director of CCBA Uganda. “And Rwenzori’s water bottling line operates around the clock, seven days a week. The performance figures of this line and those from Mbarara are the best in the entire group.” Even though the expanded capacity is already reaching its limits, the key factor in CCBA’s output is the availability of water which is a limited and therefore precious resource in Uganda.

In addition to efficiency, the subject of sustainability is becoming increasingly important not only for beverage producers in Uganda but for the rest of Africa as well. CCBA can score here, too: under the motto of ‘a world without waste’ CCBA wants to help ensure that by 2030 100% of all PET bottles sold are collected and recycled. Plastic Recycling Industries, a recycling initiative owned by CCBA and founded specifically for this purpose, buys collected PET bottles from consumers and then reintroduces them to the recovered materials cycle. If many more companies follow this example and are thus able to stem climate change, the glaciers of the Rwenzori Mountains will retain their beauty for a long time to come.

The KHS Group is one of the leading manufacturers of filling and packaging systems for the beverage and liquid food industries. The KHS Group includes the following companies: KHS GmbH, KHS Corpoplast GmbH and numerous subsidiaries outside Germany, located in Ahmedabad (India), Sarasota and Waukesha (USA), Zinacantepec (Mexico), São Paulo (Brazil) and Suzhou (China).
KHS manufactures modern filling and packaging systems for the high-capacity range at its headquarters in Dortmund, Germany, and at its factories in Bad Kreuznach, Kleve, Worms and Hamburg, where the group's PET expertise is pooled. The KHS Group is a wholly owned subsidiary of the SDAX-listed Salzgitter AG corporation. In 2019 the KHS Group and its 5,149 employees achieved a turnover of around €1.260 billion.