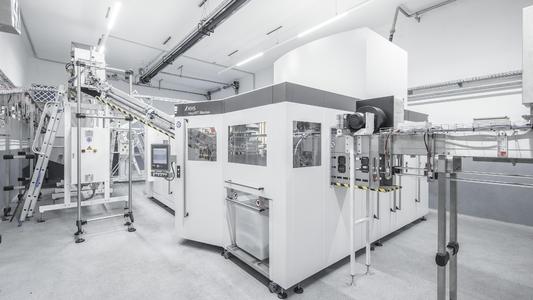 (PresseBox) ( Dortmund, 18-01-31 )
The 555th Series IV stretch blow molder from KHS has gone to the Land of the Rising Sun, where InnoPET Blomax technology is now proving itself in practice for Japanese producer of milk products, Meiji Co., Ltd. With its new stretch blow molder the international group is benefitting from greater performance coupled with lower energy consumption.

“On the Japanese market, which takes high technical requirements and flexibility for granted in conjunction with great reliability, energy efficiency is a decisive argument,” explains Matthias Gernhuber, head of Area Sales and Product Management for Asia-Pacific at KHS Corpoplast GmbH. The key factors influencing a customer’s decision to buy are thus high capacity plus the lowest possible energy consumption. The extremely energy-efficient InnoPET Blomax Series IV, which produces 48,000 PET bottles per hour in Japan, satisfied the hygiene specifications required by Meiji’s milk beverages.

“Meiji has outstanding success with its premium products,” states Tetsuya Kobayashi, representative of KHS’ trading partner for stretch blow molding technology in Japan, Marubeni Techno Systems, and goes on to describe what prompted Meiji to purchase plant machinery from KHS. “The machines installed to date for the low capacity range were no longer able to meet the growing demand. The local manufacturer, who up to now had been Meiji’s chosen supplier, had to pass when it came to supplying more powerful equipment.” When deciding which high-performance systems supplier to commission, the Japanese milk beverage producer opted for KHS. The determining factor here was that KHS technology had already established and proven itself on the local market and has had a leading role in this sector for many decades. “The decision-makers visited reference companies in Japan and spoke to the operators. Durability, reliability and savings in resources clearly spoke for Meiji’s investment in the new InnoPET Blomax stretch blow molder,” explains Kobayashi.

Energy savings made easy
With its new investment Meiji also wished to cut production costs, an endeavor which chiefly entails using resources such as energy and packaging materials efficiently. To this end, the bottler first optimized the consumption of materials together with KHS, reducing it by over 30% – which in turn also lowered the amount of energy used. “As a sustainable company saving on resources is a central component in Meiji’s corporate activities,” says Kobayashi.

A KHS success: InnoPET Blomax
It is no coincidence that KHS has now sold the 555th Series IV Blomax. “Developed to focus on energy efficiency, this machine is very popular the world over,” smiles Gernhuber. Its flexible design means that it can cope with a whole range of production specifications. Its modular construction makes part stockpiling easier and shortens maintenance times and personnel training. Thanks to its space-saving layout and optimized mechanical sequences of motion customers like Meiji profit from fewer moving parts. This results in cost-effective maintenance and significantly higher production times and thus better line availability.

Further projects planned
Gernhuber stresses that there is a very productive atmosphere between Meiji, Marubeni Techno Systems and KHS. “A long and good relationship between a customer and machine supplier considerably helps both parties to find the right solution for special production requirements together and builds up trust on both sides.” The cooperation to date has been so successful for both companies that Japan is already preparing for further projects. “In the future, too, KHS and Meiji will continue to work on reducing production costs,” concludes Gernhuber.

KHS is one of the leading manufacturers of filling and packaging systems for the beverage, food and non-food industries. The KHS Group includes the following companies: KHS GmbH, KHS Corpoplast GmbH, NMP Systems GmbH and numerous subsidiaries outside Germany.
KHS GmbH manufactures modern filling and packaging systems for the high-capacity range at its headquarters in Dortmund, Germany, and at its factories in Bad Kreuznach, Kleve and Worms. The KHS Group's PET expertise is pooled at KHS Corpoplast GmbH in Hamburg, Germany, where innovative PET packaging and coating systems are developed and produced. NMP Systems GmbH, a wholly-owned subsidiary of KHS GmbH based in Kleve in Germany, designs and markets new, resource-saving packaging systems for PET bottles.
In 2016 KHS and its 4,995 employees achieved a turnover of around €1.18 billion within the Salzgitter consolidation. The companies in the KHS Group are 100% subsidiaries of the MDAX-listed Salzgitter AG corporation.

Smart, efficient and gentle on resources: Apatin Brewery modernizes its production shop and opts for KHS