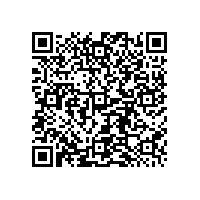 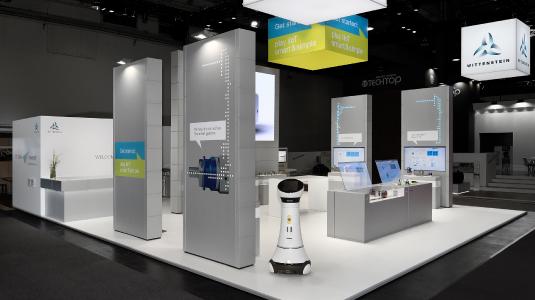 Smart gearboxes with the “cynapse” feature from WITTENSTEIN alpha made their debut at the fair. It functions using an integrated sensor module, which allows for Industry 4.0-connectivity. In this way, parameters such as temperature, vibration and operating hours can be continuously recorded.

The presentation of this pioneering range of products was the full focus of the trade fair exhibit. The exhibition’s slogan, which radiated at the centre of the trade fair stand, was visible from all four sides. At the front, the slogan was flanked by two branded cubes. Towards the back of the stand, the brand world was separated from the communications zone by a large monitor wall. At the sides, the slogan and the product highlight were additionally projected onto to 4-metre-high wall sections.

The combination of the different elements acted like a magnet, attracting countless numbers of visitors. At the stand, a Care-O-bot® greeted guests – perfect given the theme was Industry 4.0. Interesting to note: thanks to WITTENSTEIN’s intelligent drive system TAS, the mobile robot assistant can travel up to 2.3 metres per second. Finally, the product experience was enhanced. This is especially important for products whose output isn’t immediately obvious.

The smart gearbox had its own podium with a model of the gearbox and a possible infrastructure design. Additionally, this was enhanced by a transparent OLED monitor on which the actual status of the gearbox was shown.

Overall the exhibits at the trade fair stand proved that digitalisation has long played a role at WITTENSTEIN and has been translated into marketable applications. The company is transitioning from a drive manufacturer and mechatronics corporation, to the “Leader in Cybertronics” – and was very satisfied with the concept and realisation of its trade fair display.

Over 30 years successfully on the market, 170 employees and passion for what we do - we are KECK. Our references are from just as wide a range of industries as our solutions. After all, 'run of the mill' is an alien concept to us. We realise projects always in an extraordinary and creative manner, perfectly attuned to our customers from the most varying of sectors.

In realising everything from extravagant trade fair stands and showrooms through to elaborate light and communication concepts, we can implement all you require to stage your brand successfully. Our wheelhouse includes the entire spectrum of services - strategy, consultation, design, construction and assembly. The most important step in every project is to understand the brand. We really get to its core and present it in a standardised and unique way. We not only stage brands, but also make them more successful.