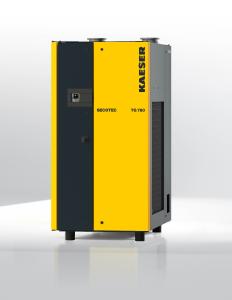 (PresseBox) ( Coburg, 20-07-29 )
High-performance Secotec TG-series refrigeration dryers from Kaeser not only impress with their latent heat storage system, future-proof use of climate-friendly R-513A refrigerant and relatively small footprint – they now also benefit from a new exhaust air system, which elevates these high performers to an entirely new level of cost efficiency when it comes to the treatment of compressed air.

Designed for large-scale industrial operations, these compact giants are capable of delivering flow rates up to 98 m³/min and ensure stable pressure dew points, even under the most challenging conditions – all whilst guaranteeing maximum levels of reliability and minimal life-cycle costs.

As with air conditioning units, dryers produce exhaust heat which must be disposed of. Earlier models, if installed in a location that was less than ideal, could experience a heat build-up which the dryer then had to expend more energy in dissipating. The Secotec TG, however, has been designed to prevent this issue from arising. Air-cooled versions are now equipped for the first time with a frequency-controlled radial fan, which, thanks to its cooling airflow, draws off as much of the accruing exhaust heat, as is needed in accordance with the current load level. The radial fan is powerful enough to allow standard exhaust air ducting to be connected directly to the refrigeration dryer. Thermal overload – caused by hot exhaust air being drawn back in as cooling air – is therefore reliably avoided.

Thanks to the optimised configuration of all components, the new dryer models are also considerably smaller than their predecessors, thereby allowing users to save on space as well as operating costs.

All Secotec dryers are equipped with a highly efficient latent heat storage system containing a medium that boasts a storage density up to 98% higher than that of conventional storage media. Requiring 46% less space and with an overall weight approximately 60% lower, innovative Secotec dryers are also significantly more compact as compared to other refrigeration dryer models with the same latent heat storage capacity.

Since the introduction of the EU F-Gas Regulation, climate protection has become the duty of each and every manufacturer. The Secotec TG is designed for use with the climate-friendly refrigerant R-513A. Compared to the refrigerants used in refrigeration dryers to date, the greenhouse gas potential of R-513A is significantly lower, hence it will remain available on the market for the foreseeable future. It is neither toxic nor flammable, which means there are no additional obligations incumbent upon operators or service providers.