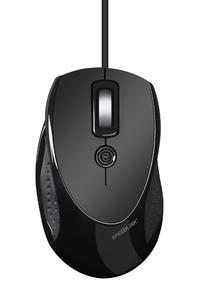 (PresseBox) ( Weertzen, 10-09-01 )
Despite omnipresent touchscreens and motion sensors, the mouse remains the most important input device for the PC - yet even 40 years after its invention, there's still room for innovation. SPEEDLINK®, the specialist in highquality input devices, has filled this gap with a new range of innovative computer mice - including one of the world's first PC mice to feature multitouch functions that make it possible to control the PC using intuitive finger gestures.

Browse your photo collection by sliding your finger across the surface, swipe it to scroll through texts, and navigate using simple gestures. Smartphones made finger gesture control popular, now it's possible on the PC too - and all without a touchscreen. The new CUE Wireless Multitouch Mouse from SPEEDLINK® combines proven optical mouse technology with highlysensitive sensors integrated into its surface that recognise gestures, using up to two fingers, and translate them into freely definable commands. As a result, the CUE doesn't need additional mechanical buttons - and its impressive sleek and stylish design isn't spoilt by cables either as connecting it is taken care of by robust 2.4GHz wireless technology. The CUE Wireless Multitouch Mouse will be available in four different colours from November 2010 and will cost €39.99 (MSRP).

Flexibility and precision are the hallmarks of the stylish SAPHYR mouse series. Their Bluetrace(TM) sensor technology unites the advantages of standard optical sensors and laser tracking. With advanced sensors and blue, shortwave LED light technology, Bluetrace(TM) delivers errorfree tracking and maximum precision on practically any surface - whether wood, carpet or marble, it doesn't matter.

A rubberised scroll wheel featuring precise notch positions, two additional buttons and a dpi switch for rapid changing of the sensitivity level, make the mice from the SAPHYR family ultra practical. Three versions are available which differ in the way they connect to the computer - yet whether it comes with the retractable Flexcable(TM) , 2.4GHz wireless technology or Bluetooth®, every SAPHYR offers maximum flexibility and freedom of movement, both on the desktop as well as on the move. With its plethora of clever functions and maximum quality, the Bluetrace(TM) mouse series is aimed at both ambitious users and pros alike. Available from October 2010, the SAPHYR series will be available at prices starting from €14.99 (MSRP).

The SPEEDLINK® FERRET Gaming Mouse is designed to meet the needs of demanding PC gamers for whom having a highend input tool with them both while on the move and at LAN parties is an absolute must. The maximum precision 3200dpi optical sensor responds with no lag to even the fastest of movements, and, thanks to the dpi switch which is directly integrated in the mouse, can be set at different sensitivity levels which are easily configured using the driver software; the scroll wheel even lights up in a variety of colours to indicate the actual dpi setting based on a colourcoding scheme which is also freely configurable. Just like the other mice in the successful SPEEDLINK® gaming range, the FERRET, despite its compact size, also fits nicely in the hand thanks to outstanding ergonomics, six quicklyaccessible buttons and rubberised side areas. The FERRET Gaming Mouse will be available from October for €19.99 (MSRP).

Jöllenbeck GmbH is one of Europe's leading manufacturers of office and entertainment peripherals.

Since its formation, Jöllenbeck has positioned itself very successfully in the PC, video gaming console and handheld accessories market. The product portfolio of its own brand SPEEDLINK® includes sound systems, headsets, mice, mousepads, keyboards, gamepads, joysticks and various other accessories.

SPEEDLINK® products impress with their novel technology combined with design excellence and outstanding functionality. Through SPEEDLINK®, Jöllenbeck is represented in more than 40 countries worldwide.