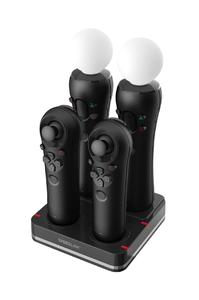 (PresseBox) ( Weertzen, 10-08-25 )
The launch of the PlayStation® Move system in September 2010 marks a new chapter in the PS3's® success story - and SPEEDLINK® will be there right from the start. The manufacturer will offer an endtoend range of practical accessories which will increase ease of use, protection and above all the sheer fun of gaming with Sony's® motion control system. When developing the Move range, SPEEDLINK® incorporated the many years of experience it gained from its highly successful Wii® accessories range to start manufacturing matching products months before the launch of the new platform. The Move portfolio will initially comprise two chargers, a sports attachment set for the motion controller, a gun attachment as well as protective silicone skins for both Move controllers.

The BAY 4-Port Move Charging System can charge the integrated rechargeables of up to two motion controllers and two navigation controllers at the same time. The compact charging station works independently of the PlayStation® console and includes a 230V AC adapter to power it. The BAY is ideal for gamers who want to quickly and easily charge up to two complete controller sets for multigamer parties without needing to use up one of the console's USB ports.

The TRIDOCK 3in-1 Move Charging System allows gamers to charge a Move controller set, comprising a motion and navigation controller, plus a PS3® gamepad at the same time - giving gamers a full arsenal of input devices for the Sony® console which are ready for action again a short while later. The TRIDOCK also includes an AC adapter for total console independence. The charger is perfect above all for single player gamers who enjoy playing both Move as well as classic PS3® titles.

Three sturdy sports attachments for the motion controller will give any lounge a real stadium atmosphere. The MATCH Move Sports Set comprises a tennis racket, a table tennis bat and a golf club which will make many PS3® Move sports games feel even more realistic without affecting the functionality of the controller in any way at all.

On top of that, the PEACEMAKER Move Gun will provide more realism as this motion controller gun attachment is of the same size and design as a classic revolver. It goes without saying that full access to the input device's functions are retained - and even the Start and Select buttons can continue to be used, with the rear shoulder button being operated by the PEACEMAKER's trigger, just like a real gun.

The snugfitting GUARD Silicone Skins are effective at safeguarding the PlayStation® Move motion controller as well as the navigation controller against knocks - for greater protection when playing actionpacked games. The soft, highgrip silicone material also keeps dirt and scratches at bay, plus allows the gamer to hold the controllers much better thanks to their nonslip finish.

The Move accessory range from SPEEDLINK® will be available from September 2010. Further products, such as a Move Cable Set, are already being developed. This makes Jöllenbeck GmbH one of the first manufacturers to offer gamers an endtoend product portfolio for this platform - thereby further building on the company's position as Europe's leading provider of highquality video gaming accessories.

Jöllenbeck GmbH is one of Europe's leading manufacturers of office and entertainment peripherals. Since its formation, Jöllenbeck has positioned itself very successfully in the PC, video gaming console and handheld accessories market. The product portfolio of its own brand SPEEDLINK® includes sound systems, headsets, mice, mousepads, keyboards, gamepads, joysticks and various other accessories. SPEEDLINK® products impress with their novel technology combined with design excellence and outstanding functionality. Through SPEEDLINK®, Jöllenbeck is represented in more than 40 countries worldwide.