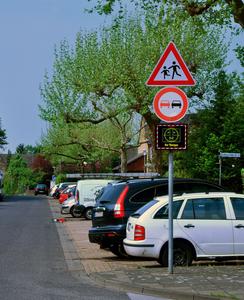 (PresseBox) ( Jena/Monheim, 13-05-16 )
On May 16, 2013, Christian Carius, Minister for Building, Regional Development and Transport of the Free State of Thuringia, launched the state-wide campaign to improve road safety in local communities by using a speed display. At the symbolic handover of the first display by Jenoptik CEO Dr. Michael Mertin, Christian Carius called on the state's local communities to get involved in the "Smiling saves lives" campaign.

As part of the Thuringian "Smiling saves lives" initiative, communities can apply to purchase a speed display, of which 2,000 euros will be funded by the state. The state will provide a total of 200,000 euros for the initiative in 2013 and 2014. This means that funding can be provided for a maximum of 50 applications.

Minister Christian Carius: "The focus of this initiative is on protecting more exposed road users such as children, the elderly, wheelchair users, pedestrians and cyclists. We are promoting this state-wide road safety campaign together with a strong partner - JENOPTIK AG."

"Jenoptik, together with the communities, is pleased to support the initiative of the Thuringian Ministry for Building, Regional Development and Transport (TMBLV) to purchase speed displays in order to push towards improved road safety", said Jenoptik CEO Dr. Michael Mertin speaking at the symbolic handover of the first speed display to Minister Christian Carius.

Jenoptik Traffic Solutions division as partner of the Thuringian project.

RADARLUX Radar Systems GmbH, a Jenoptik Traffic Solutions division company, has assembled two display packages for the Thuringian project that are expected to make a permanent impact on the driving behaviour of road users. One display package uses existing power connections in the surrounding infrastructure to provide power to load its battery, while the other package has a solar panel above the display. The Jenoptik company is offering both versions of the "Thuringia Display Edition" at a special price.

The combination of the radar-based digital speed display and the commending or admonishing effect of the green "smiley" or the red "sadly" are a proven and successful preventive and educational road safety tool, especially at entrances to towns, in front of schools and kindergartens, in low-speed zones and on company premises. The display uses the happy green or the sad red face to appeal to the conscience of road users. The speed and graphic displays are clearly visible from a distance of 150 meters and the automatic brightness adjustment of the LED display to the ambient light guarantees good visibility both day and night.

The Jenoptik division previously provided a free speed display in Weimar in 2010 in order to help improve road safety in Thuringia. A pedestrian crossing in the catchment area of two schools was redesigned based on a student concept as part of the European "Roads to Respect" campaign. A Jenoptik speed display positioned in this area has since helped to improve the safety of children on their way to school.

Two displays are also located on the street leading to the Peter-Ustinov-Gesamtschule (comprehensive school) at the division's headquarters in Monheim am Rhein (North Rhine-Westphalia). "The entire faculty is delighted by the effectiveness of the display", says RADARLUX Managing Director Arne Bergmann. "The display helps to reduce the speed of the vehicles and improves safety for the students", he reports, referring to the daily experiences of the teachers.

Issue of "road safety" a top priority in Thuringia.

The Thuringia Ministry for Building, Regional Development and Transport has declared that road safety activities in the state are a top priority. The road safety initiative "Think. Drive. Arrive - Improve safety on Thuringia's roads" was launched in 2010. Excessive and inappropriate speed is also a key factor behind road traffic deaths and injuries in Thuringia (2010: 42.1 percent). A well established and dense network of traffic routes extends throughout the Free State of Thuringia. The 25,000 kilometers of roads are absolutely vital for mobility in the state.

In the Traffic Solutions division, Jenoptik develops, manufactures and markets components and systems that increase road traffic safety throughout the world. The product portfolio, which is based on the proven Robot technology, includes comprehensive systems for all aspects of road traffic, such as speed and red-light monitoring systems as well as OEM (Original Equipment Manufacturer) products and systems for detecting traffic violations. In the services area, the Jenoptik division covers every aspect of the support process chain - from system development, construction and installation of the monitoring infrastructure, to capturing images of infringements and their automatic processing, through to issuing the citations and collecting the fines as the system operator.