Near Bayeux in French Normandy, Jenoptik has invested in a modern production environment for the approximately 60 industrial metrology employees 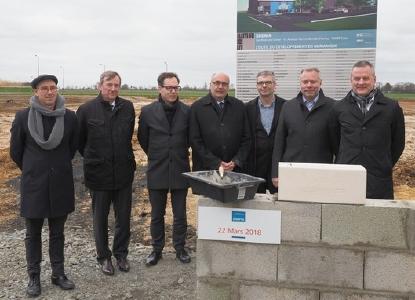 (PresseBox) ( Jena / Bayeux, 19-04-03 )
New production space, offices and a modern metrology laboratory were built on an industrial site southeast of Bayeux, only a few kilometers from the previous Jenoptik location. The new building has a total area of around 2,500 square meters. Construction began in spring 2018, the employees moved into their new workplaces at the beginning of this year.

At the opening ceremony on April 3, 2019, Jenoptik President & CEO Stefan Traeger and CFO Hans-Dieter Schumacher welcomed customers, suppliers and partners as well as political representatives. The opening was at the same time the starting point of a regional event on the latest trends in industrial measurement technology to be held regularly.

With this investment Jenoptik has state-of-the-art production and sales environment for its high-precision industrial measurement machines, which are used in industry and automotive manufacturing. In France, Jenoptik’s customers include renowned automotive manufacturers and supplier companies. As regards the global metrology business of Jenoptik, France is the excellence center of pneumatic metrology.

The original corporate building from the 1930s had been extended again and again over decades and no longer met the requirements of modern production environments. ”In the new building, we can offer our customers, employees and partners a modern environment and are also an attractive partner for universities and technical colleges,” says site manager Marc Schuh. Contact with research institutions is to be considerably expanded.

In the metrology market segment Jenoptik acquired the French company ETAMIC S.A. in 2006 and merged it with its industrial metrology business. Jenoptik’s other major metrology sites are located in the geographic centers of the global automotive industry: Besides Germany and France, these are Rochester Hills near Detroit in the USA, Shanghai in China and Pyeongtaek in Korea.

The industrial metrology business belongs to the Light & Production division, which Jenoptik is currently strongly expanding. In addition to acquisitions to strengthen the global business Jenoptik is also investing in existing locations. The new production complex in Rochester Hills, Michigan, went into operation in 2017. In Villingen-Schwenningen, the German metrology headquarters, a new production complex is currently being built for around 11 million euros.

Jenoptik is a globally operating technology group. Optical technologies are the very basis of our business with the majority of our products and services being provided to the photonics market. Our key target markets primarily include the semiconductor equipment industry, the medical technology, automotive and mechanical engineering, traffic, aviation as well as the security and defense technology industries. Jenoptik has more than 4,000 employees worldwide.

The Light & Production division of Jenoptik is a global specialist in the optimization of manufacturing processes. Our many years of experience and know-how in the field of industrial measurement technology and optical inspection, modern laser-based material processing and highly flexible robot-based automation enable us to develop tailor-made manufacturing solutions. As established key supplier in the global automotive market we face the modern challenges regarding flexibility, productivity and increasing variety and thus cover the growing demand for complex industrial solutions with a focus on machine integration and process automation.