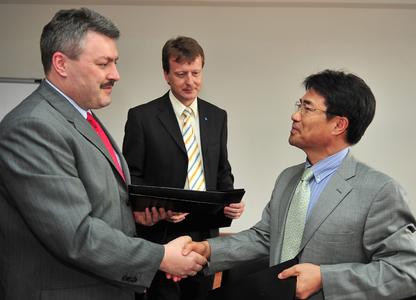 (PresseBox) ( Jena, 09-07-03 )
Jenoptik's Lasers & Material Processing division will in future be represented in the Asian growth market with a laser application center, in close cooperation with the Korean company Telstar-Hommel Corp. Both partners have founded the joint venture JENOPTIK Korea Corp., which primarily addresses the Asian electronics, flat-panel, and photovoltaics industries.

Byung-Hoon Im, President and CEO of Telstar-Hommel, and Michael Mertin, CEO of JENOPTIK AG, signed the shareholders agreement for Jenoptik's new joint venture in Korea, JENOPTIK Korea Corp., today. Telstar-Hommel will hold 33.3 percent of shares in the company which is headquartered in Pyeongtaek (Gyeonggi Province) about 70 kilometers south of Seoul. With 66.6 percent, JENOPTIK AG will be the majority shareholder. With the joint company, Jenoptik is boosting its direct presence in the Asian growth region. By the beginning of next year, an application center for Asian customers of the Lasers & Material Processing division will be built locally. The partners will invest a total of 4.4 million US dollars by the end of 2009.

The application center is aimed at the entire Asian market and is due to open in early 2010. Jenoptik will present a range of systems for laser material processing there, specifically addressing the electronics, flat-panel, and photovoltaics industries. Jenoptik laser processing systems will then be available to interested parties for processing brittle materials such as display glass, solar cells, ceramics and silicon wafers, as well as for the special laser separation method for these materials, so-called TLS-dicing (TLS = thermal laser separation). Customers may test production techniques on the systems and refine them in accordance with their requirements. At the end of the year, the Lasers & Material Processing division will also manage the after-sales service from Korea for Asian customers or coordinate it in close collaboration with other Jenoptik sites in Asia. In total, there are currently 42 laser systems from JENOPTIK Automatisierungstechnik GmbH being used in Asia for a range of applications. 12 further systems have been ordered and will be delivered in the course of this year, among others to Taiwan.

"With the laser application center in Korea, we have taken a further important step towards internationalization and now have direct access to the Asian market for our Lasers & Material Processing division. In Telstar-Hommel we have chosen an experienced partner who has already been representing our Industrial Metrology division for years", says Jenoptik boss Michael Mertin. The Industrial Metrology division has been distributing measuring technology for the Asian automobile industry through Telstar-Hommel Corp. since 2004. The customer base today includes the automobile companies Hyundai, Kia, and Daewoo, as well as a multitude of Korean automotive supplier companies.

Byung-Hoon Im, President and CEO of Telstar-Hommel, referred to the successful cooperation and the great potential of Jenoptik's business activities: "We have had a successful and close tie-up with the Jenoptik Industrial Metrology division since 2004 and we anticipate the best success to the laser business with Jenoptik in the dynamic Asian market."

JENOPTIK Korea Corp. will initially launch with four employees and is open for the entry of further Jenoptik Group divisions on the Asian market. With a total of around 42 million euros in the 2008 fiscal year, Jenoptik generated just under 8 percent of total sales (550 million euros) in Asia. In comparison with 2007 (35.5 million euros), sales in Asia rose by over 15 percent, and are expected to increase considerably in the coming years. "We still have great potential in this growth market, which we can now address better than previously with our direct presence", said the Jenoptik boss.