Dr. Stefan Traeger to remain Chairman of the Executive Board of the Jenoptik Group for another five-year term 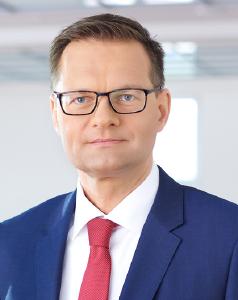 (PresseBox) ( Jena, 19-07-29 )
In its extraordinary meeting on July 29, 2019, the Supervisory Board of JENOPTIK AG confirmed CEO Dr. Stefan Traeger in office and approved the start of a structured sales process for the mechatronics division VINCORION.

Following his current appointment, which runs until June 2020, Dr. Stefan Traeger will remain Chairman of the Executive Board of the Jenoptik Group for a further five years. The 51-year-old was confirmed in office by the Supervisory Board of JENOPTIK AG. He joined Jenoptik in the spring of 2017. “Over the last few years, under the management of Dr. Stefan Traeger, Jenoptik succeeded in combining the Group’s transformation into a technology group focused on photonics with profitable growth and successful acquisitions. Continuity in the Group’s management by Dr. Traeger and CFO Hans-Dieter Schumacher creates the basis to consequently pursue the launched strategy for more growth and profitability”, says Matthias Wierlacher, Chairman of the Supervisory Board of JENOPTIK AG.

Since 2017 Dr. Stefan Traeger and Hans-Dieter Schumacher have together initiated and implemented the company’s strategic realignment and focusing under the motto “More Light”. This includes a new market-oriented organizational and management structure, as well as measures to boost innovation and increase global reach. These have significantly improved the company’s international market presence and transparency within the Group. In the last two years, key acquisitions were successfully completed and new record figures were achieved in revenue, order intake, and earnings.

With the launch of the project, the Jenoptik Executive and Supervisory Boards are now starting a new phase of the company’s transformation in order to pursue an active portfolio policy and strengthen the business focus on the competencies in optics and photonics. On the basis of the strategic course adopted, the management is considering the potential sale of all shares in the VINCORION division, which runs the Group’s mechatronics business. “Having obtained the approval of the Supervisory Board and completed the necessary preparatory work, we can now start the project,” says Stefan Traeger, Chairman of the Executive Board at JENOPTIK AG.

The proceeds from the potential sale of VINCORION will be used to expand the company’s international reach and vertical integration, particularly in the strategic growth regions of the Americas and Asia. “We want to optimize the product portfolio and gain access to new customers and markets through bolt-on and transformatory acquisitions,” says Stefan Traeger, adding that “the mechatronics business operated under the brand name of VINCORION will then have the chance to grow successfully with a new owner.”

One of Jenoptik’s strategic measures carried out in the 2018 fiscal year involved the reorganization of the business structure within the Group. In this context, functions and responsibilities previously centralized in the holding company were also transferred back to the then Defense & Civil Systems segment in order to ensure its autonomous business operations. The new VINCORION brand for the mechatronics business was launched in the fall of 2018. On the introduction of the new division structure in early 2019, the photonics business in the former Defense & Civil Systems segment was transferred to Jenoptik’s new Light & Optics division.

Today, VINCORION has positioned itself as a specialist for custom solutions in challenging, strictly regulated markets. With a product range serving the military, aviation, and rail industries, some 790 employees generated revenue of 166 million euros in 2018. Over the past fiscal year, the mechatronics business thus contributed around 20 percent to the revenue generated in the Jenoptik Group.

Jenoptik is being advised on the structured sales process by international investment bank Houlihan Lokey and law firm White & Case.

Jenoptik is a globally operating technology group. Optical technologies are the very basis of our business with the majority of our products and services being provided to the photonics market. Our key target markets primarily include the semiconductor equipment industry, the medical technology, automotive and mechanical engineering, traffic, aviation as well as the security and defense technology industries. Jenoptik has about 4,000 employees worldwide.

Recommend Dr. Stefan Traeger to remain Chairman of the Executive Board of the Jenoptik Group for another five-year term press release