Dr. Michael Mertin elected Vice President of the Economic Council to the CDU 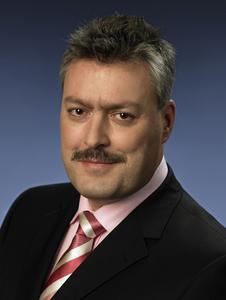 (PresseBox) ( Jena, 13-06-25 )
On June 25, 2013 the federal delegates' conference of the Economic Council to the CDU elected Jenoptik CEO Dr. Michael Mertin as its new honorary vice president, following the tenure of Dr. h.c. Hermann-Josef Lamberti. The election took place on the occasion of this year's Wirtschaftstag in Berlin, at which the Economic Council to the CDU also celebrates its 50th anniversary.

Dr. Michael Mertin has been a member of the executive committee of the Economic Council to the CDU since September 2008. He has been deputy chairman of the regional organization of Thuringia since June 2010. "I am very happy about my election to vice president of the Economic Council," said Dr. Michael Mertin. "I will continue to focus on maintaining Germany's ability to compete internationally, based on the principles of the social market economy. This requires economic responsibility, entrepreneurial courage and future orientation, less government involvement, a tax reform and a stable currency as well as investments in the infrastructure of our country. This is the only way to secure the foundation for future common prosperity in Germany."

Lobbying for a Strong German Economy

The Economic Council to the CDU is a German association with nationwide operations and a current membership of 12,000. Founded in 1963, the association offers its members a platform for involvement in economic and social politics, guided by the principles of Ludwig Erhard's social market economy. The Economic Council to the CDU represents the interests of entrepreneurs in politics, administration and the general public at European, federal and state level.

This year's Wirtschaftstag in Berlin is also the launch event for the 50th anniversary of the Economic Council. Under the motto "A strong Germany for a strong Europe" the following main subjects are discussed: overcoming the European debt crisis, the energy revolution, demographic change as well as reform policies with growth perspectives.

Dr. Michael Mertin has been CEO of JENOPTIK AG since 2007. He studied physics and earned his PhD from the Fraunhofer Institute for laser technology before starting his industrial career in 1996. During the following ten years, Dr. Michael Mertin has worked in several management positions at Carl Zeiss in Oberkochen. He began working at JENOPTIK AG as CTO/COO in October 2006.

Dr. Michael Mertin is an active member of various economic committees and technology organizations, including his position as chairman of Spectaris, the German high-tech industry association and his membership in the university council at the technical university in Ilmenau. Since November 2010, he has been president of the European technology platform Photonics21. He is also chairman of the board of trustees of the Fraunhofer institute for applied optics and precision engineering (IOF) in Jena.

As an integrated optoelectronics group, Jenoptik divides its activities into five divisions: Lasers & Material Processing, Optical Systems, Industrial Metrology, Traffic Solutions and Defense & Civil Systems. Its customers around the world mainly include companies in the semiconductor and semiconductor equipment manufacturing industry, automotive and automotive supplier industry, medical technology, security and defense technology as well as the aviation industry. The Jenoptik Group headquarters are in Jena (Thuringia). In addition to several major sites in Germany Jenoptik is represented in nearly 70 countries. JENOPTIK AG is listed on the Frankfurt Stock Exchange and included in the TecDax index. Jenoptik has approx. 3,270 employees and in 2012 generated sales of 585 million euros.

Jenoptik: Record figures achieved in 2nd quarter; strong performance expected to continue in 2nd half of 2021