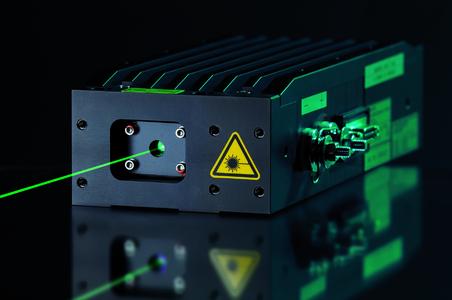 (PresseBox) ( Jena, 10-02-03 )
Since the start of largescale production in late 1999, sales figures for frequencydoubled green disk lasers have risen steadily. Over 1,000 laser units are now produced every year in Jena-Göschwitz. Jenoptik's successful product is primarily used in medical applications, and the latest version was received extremely well at Photonics West.

The 10,000th frequencydoubled disk laser in the green wavelength range was sold last week at the laser exhibition PHOTONICS WEST 2010 in San Francisco. The majority of this type of lasers is used in a medical practice for eye operations. Thanks to their specific advantages and flexible range of applications, these disk lasers have almost totally replaced the lasers previously used in this sector, which were inefficient and usually had large dimensions.

With the same power output of 3 to 8 watts, the new version of the Jenlas.®D2.x requires a housing only a quarter of the previous size, making its use as a medical laser even more attractive. All the leading medical equipment manufacturers showed great interest in the new version of the laser at Jenoptik's exhibition stand.

Laser radiation in the green spectral range is used to "reattach" the retina in the fundus of the eye. It is a procedure which can combat major and extensive detachment of this part of the retina due to age or illnessrelated retinal detachment and thus considerably improve this clinical picture. The laser is also used in dermatology to treat skin changes, for example in obliterating varicose vessels. Furthermore, the Jenlas.®D2.x is outstandingly suitable for material processing as well as show & entertainment.

The success of the disk laser, a variety of solidstate lasers, lies in the geometry of the laser medium. Instead of a solid cylindrical laser crystal, a thin disk a few hundred micrometers thick is the active laser material. Laminar cooling is possible which does not require water and thus reduces installation and maintenance costs. Advantage of the apparatus: the laser is compact, efficient and delivers excellent and consistent beam quality.

Jenoptik's Lasers & Material Processing division makes it one of the leading providers of laser technology - from component through to complete system. The increased productivity from which our customers benefit is the key factor in the use of Jenoptik laser technology. In the area of laser technology, the division has specialized in highquality semiconductor materials and reliable diode lasers as well as innovative solidstate lasers such as for example disk and fiber lasers. In the area of highpower diode lasers Jenoptik is acknowledged worldwide as a leader in quality.

Lasers are developed as components and system for various applications and integrated into material processing systems. These systems enable our customers to work with plastics, metals, glass, ceramics, semiconductor materials and solar cells, both in thinfilm as well as wafer technology, with maximum efficiency, precision and safety. As such, Jenoptik has control over the entire added value chain for laser material processing in the form of development, manufacture and sales and is a reliable global partner for the customer.