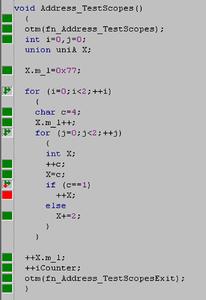 According to Beizer [2] 100% statement coverage at source code level might cover 75% or even fewer statements at object code level [3].

Programs written in high level programming languages like C, C++, ADA etc. are not running on a processor or controller without being converted to object code. There is a chain of transformations that produces the object code running on the actual target. For C programs usually these steps are: preprocessing, compilation, optimization, assembly, linking and conversion. These steps are not bijective: information is added and removed in every step.

The examples in the article show that the usage of complex instructions (e.g. for loop), complex conditions (e.g. if statement) or library/operating system functions add object code that is not directly traceable to source code statements.

Here one example discussed in the article - Compiler Optimizations:

!! When measuring code coverage, verify what source code lines generate object code and if not, check why. Any code change and recompilation may change the compiler optimization and could lead to untested code paths.

The requirements for code coverage analysis are constantly increasing in almost every market. Code coverage based on object code is a convenient method to test as close as possible to the final product.

To achieve a high level of code coverage (some claim 100% is the right figure), review the object code and find test cases to cover the (not yet) tested code.

iSYSTEM tools provide code coverage analysis within the same tool that is used for code development. This way development costs and time are optimally used to detect and fix software bugs as soon as possible within the development cycle.

[1] How reliable is Code Coverage Information shown in Source Code?Here you find the complete article with all examples

iSYSTEM products are best suited for development and test of security-sensitive applications. Commonly used are these tools in the automotive, avionic and medical areas. To achieve an optimal integration of development tools, iSYSTEM maintains close relationships with semiconductor, compiler, RTOS and test tool vendors.

The majority of iSYSTEM products present a link between the embedded system and the host PC. Dependent on the CPU architecture an in-circuit emulator, an on-chip debugger, an on-chip debugger plus trace tool or an external bus analyzer can be used. The modular design allows the subsequent use of iSYSTEM products in other configurations. iSYSTEM tools support more than 50 different CPU architectures, 2500 microcontrollers and 150 compilers.