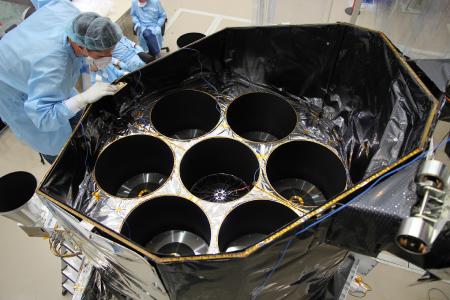 (PresseBox) ( Braunschweig, 19-07-17 )
After years of development, manufacturing and integration the eROSITA mission was launched from Baikonur on July 13th on-board of the Russian-German “Spectrum-Roentgen-Gamma” (SRG) spacecraft. Leaving Earth behind, eROSITA will travel to the second Lagrange point (L2) of the Sun-Earth system at a distance of about 1.5 million kilometers to scan the entire sky with unprecedented sensitivity. It will detect more than 100,000 of the most massive bound objects in the Universe, millions of active black holes at the centers of galaxies, as well as rare objects in the Milky Way, such as isolated neutron stars. The mission will thus provide valuable information about the mysterious "Dark Energy", the force behind the accelerated expansion of the Universe.

INVENT GmbH is a pan-European engineering company specialising in the development and manufacture of fibre composite structural and functional components, mainly for the aerospace industry. The company portfolio also includes traffic technology, plant and mechanical engineering and medical technology. Activities extend from the preparation of theoretical studies and prototype construction through to development and series production.