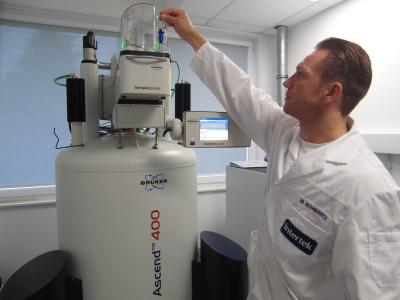 (PresseBox) ( Bremen, 16-07-05 )
Intertek, a leading Total Quality Assurance provider to industries worldwide, is developing innovative methods of analysis to determine the regional and botanical origin of honeydew honeys, as part of BoogIH (Botanical, zoological and geographical identification of honeydew honey) - a joint research project funded by the German Federal Ministry of Food and Agriculture (BMEL).

BoogIH was initiated as a way to determine the geographical and botanical origins of honeydew honeys; which are made from the honeydew excreted by plant sucking insects such as aphids. The project participants included Intertek Food Services in Bremen, three German university institutes and an isotope laboratory.

Dr Gerhard Rimkus, Project Manager at the Intertek Bremen laboratory, states: “Over the course of the next three years, the project aims to elaborate standardised reference methods using latest techniques for the differentiation of honeydew honey’s botanical and geographical origin, allowing future application by both the honey industry and official food authorities.” Intertek will provide both technical expertise and leadership, building on its long established regional and international reference catalogue of honey across the company’s Food Services network.

Recently, a Nuclear Magnetic Resonance (NMR) system has been installed for authenticity testing at Intertek’s Bremen site. An important advantage of the untargeted NMR profiling technique is that unknown adulterations may be detected using statistical tests. Additionally, further aspects of authenticity, for example, the verification of a declared botanical and geographical origin as well as the assessment of relevant quality parameters such as sugars and organic acids, are processable in a single operation. This is in contrast to other techniques which typically focus on the detection of specific markers (targeted analyses). Instead, an entire spectrum of the sample’s ingredients is recorded and can also be used in retrospective analyses. The NMR profiling technique complements Intertek’s existing spectrum of honey adulteration tests and provides an additional tool to ensure the authenticity of honey products.

Intertek is a leading quality solutions provider to industries worldwide. From auditing and inspection, to testing, training, advisory, quality assurance and certification, Intertek adds value for its customers by helping improve the quality and safety of their products, assets and processes. With a network of more than 1,000 laboratories and offices and over 40,000 people in more than 100 countries, Intertek supports companies' success in the global marketplace, by helping customers to meet end users' expectations for safety, sustainability, performance, integrity and desirability in virtually any market worldwide. Visit www.intertek.com.

Intertek Food Services in Bremen goes from strength to strength