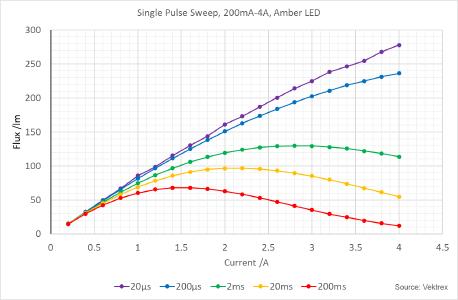 Newer applications in the fields of automotive lighting and machine vision rely on state-of-the-art LEDs that are as small as possible and possess a high luminance. In order to create this minimal size under cost restraints, heat distributing elements are often not included or reduced to a minimum. In the past few years, the industry has used a long-pulse process for determining the L-I curve (light yield: current) for the characterization of LEDs in development and production. The current is applied to the LED in accordance with the IES LM-85 standard over several milliseconds. With state-of-the-art high-power LEDs (i.e. LEDs with high current densities), however, a not inconsiderable heat build-up occurs on account of the lack of cooling over this long time period. This non-constant junction temperature during the test results in a distorted measurement curve.

A recent study has shown that at typical measurement conditions short-pulses of less than 40 microseconds are required for the undistorted characterization of next-generation LEDs (cf. LED Professional Review 1/21, “Short-pulse testing eliminates self-heating errors to produce true L-I graphs”). A heat-induced decline in performance can be significantly reduced and the roll-over effect avoided with such short-pulse testing (see Figure). In addition, short-pulse measurements more accurately determine the maximum compliance voltage required to drive the required current. The study found high-current WPE (wall-plug efficiency) measurement, for the selected example LED, was over 60% more accurate than WPE measurement using the long-pulse process.

Reliable short-pulse measurements require pulsed current sources with fast rise and fall times in conjunction with spectroradiometers having measuring times in the microsecond range. In the design of the new CAS 125 spectroradiometer, Instrument Systems opted for a CMOS sensor, controlled by specially developed readout electronics. These device-specific readout electronics permit time-optimized control of the spectrometer, delivering minimum exposure times of 0.01 ms – 40 times faster than the CAS140D. Precise triggering is also essential to ensure the LED is correctly powered during the short integration time.

Several other innovations distinguish the CAS 125. Its spectrograph block is based on the established CAS 140D high-end device. The new spectrometer thus features an optical performance comparable to the CAS 140D in terms of stray light and optical throughput. The already shortened measuring times of the CAS 125 can be further significantly reduced with the software-based recipe mode for consecutive measuring steps. Finally, a unique feature of the CAS 125 is the integral temperature stabilization of the sensor. This ensures a dark current behavior independent of ambient conditions, so that the CAS 125 ensures optimum long-term stability even in temperature-unstable environments.

Instrument Systems GmbH, founded in Munich in 1986, develops, manufactures and markets all-inone solutions for light measurement applications. Its core products are array spectrometers and imaging colorimeters. The company's main fields of activity are LED/SSL and display metrology, spectral radiometry and photometry, where today Instrument Systems is one of the world's leading manufacturers. The Optronik line of products for the automotive industry and traffic technology is developed and marketed at its Berlin facility. Instrument Systems has been a wholly-owned subsidiary of the Konica MinoIta Group since 2012.