Challenging times ahead for shipyards 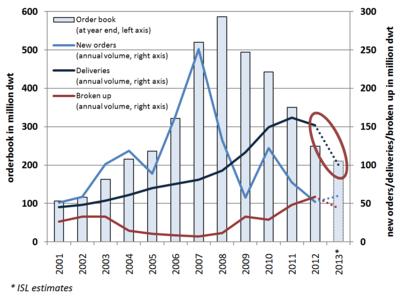 (PresseBox) ( Bremen, 13-11-19 )
After having built a "bulk load" of ships in the years 2010-2012 with an average volume of 154 million dwt per year, the output of the international yard industry is set to fall to around 100 million dwt in the current year and could decline even further in 2014 as ISL's latest report "World Shipbuilding and Shipbuilders" shows.

This downfall of roughly one third of shipbuilding activity in 2013 is attributable to the remnants of the order wave, which had built up in the previous boom years. In line with the time-lag between the placing of these orders and the delivery of the vessels in the trough years, the weaker ordering activity is finally taking its toll on the utilization of the global shipyards. Even without the proper conversion into cgt, it is evident that falling 33 per cent below the previous year's output will have a major impact on such a capital-intensive industry. Whilst still a tremendous volume and generally comparable to the year 2010 and 2011, the capacity of ships delivered in 2012 dropped for the first time since more than a decade. The weak output continued in 2013 with only 61 million dwt of new tonnage delivered in the first half of the year and total deliveries expected to reach only around 100 million dwt throughout the entire year 2013.

A part of the problem is that regardless of the relatively low newbuilding-prices and the prospects of a possible recovery of the shipping markets in the future, ordering activity reached a ten-year-low of 52 million dwt in 2012, according to figures provided by Clarkson Research Services Limited (CRSL). This volume is 33 per cent lower than during 2011 and equals only one third of the order levels of the boom years 2003-2008 in which on average ships with a capacity of 150 million dwt have been ordered annually.

Although in the first half of 2013, the ordering activity gained momentum and stood slightly above the previous year's level, the major trend is relatively clear: After three years of reduced ordering activity, the global merchant shipbuilders are headed for a trough in 2013, 2014 and presumably 2015 in terms of potential tonnage output.

The only "noteworthy record" in 2012 as far as the world merchant fleet is concerned, has been that driven by weak earnings across all of the major shipping markets: ship breaking reached an all-time high of 59 million dwt, surpassing the 2011 record volume by a staggering 22 per cent.

Resulting from the poor ordering activity, the world order book continued its decline, falling below 250 million dwt for the first time since 2005 and reaching 231 million dwt by mid-2013. Since peaking in autumn 2008, the order book thus has decreased by 60 per cent. As of July 1st 2013, the total order book represented around 15 per cent of the existing fleet capacity. Whilst this theoretically should match the 2-3 year demand growth prospects of the shipping markets, the order book is heavily skewed towards deliveries in 2013/2014 and tankers, containers and bulkers are currently still in oversupply. There is thus a temporary lid on the recovery of the shipping markets and hence also the potential cash that could be generated and invested in new tonnage in the short run. For shipyards this means that the outlook for 2014 will be challenging: construction activity is set to wear even thinner and newbuilding contracts are expected to remain in scarce supply, driven by the current trough stage of the shipping markets.

By the end of 2014, things could start to look more favourable - depending on ship type and segment - and ordering could speed up further. Yet, even if the world seaborne trade were to continue to develop along its vivid long-term growth trend, it would not warrant deliveries of 150 million dwt per year again anytime soon, so yard overcapacity is a reality.

The ISL - Institute of Shipping Economics and Logistics was founded in Bremen in 1954 and is one of Europe's leading institutes in the area of maritime research, consulting and knowledge transfer today. Our employees in Bremen and Bremerhaven handle projects from all over the world in the fields of logistics systems, maritime economics and transport as well as information logistics and turn innovative ideas into solutions with practical applicability.