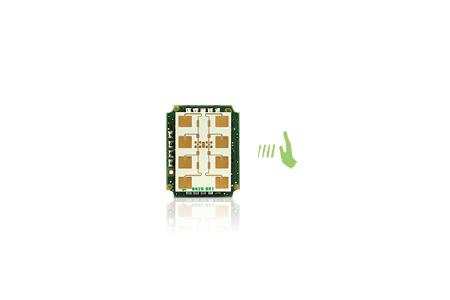 (PresseBox) ( Donnersdorf, 20-07-13 )
InnoSenT GmbH introduces a new product for automation applications: the company has developed the IMD-3000 radar system as a reliable and modern alternative to push-button switches. The new product enables ticket machines, doors, dispensers, lights, and other devices to be controlled without contact. Its compact design allows customers to retrofit the system even in an existing infrastructure.

People operate numerous switches every day to trigger certain functions. In the course of a day, countless people’s hands touch the same button. We thus involuntarily come into contact with numerous pathogens and significant dirt.

This contact can be avoided with a touchless switch. This issue is more relevant than ever in 2020. The demand for contactless technology is high. Radar systems such as the IMD-3000 are used as proximity switches in devices such as dispensers, bottle deposit machines, or ticket machines. This can help to reduce the risk of a smear infection.

Compared to other contactless technologies such as PIR sensors, radar boasts an important advantage: The contactless, physical measuring function is extremely robust and reliable. InnoSenT’s radar systems are not adversely impacted by lighting conditions or extreme temperatures, and the radar penetrates plastics. Even adverse weather conditions such as rain, wind, and snow are not a problem. Dust, fog, and dirt do not restrict functionality. Hand coverings such as gloves do not impact performance. No maintenance is necessary either. The IMD-3000 is optimally equipped for indoor and outdoor use.

The contactless operating principle of the IMD-3000 is based on electromagnetic microwaves emitted by the system’s radar antenna. If they hit an object, it reflects the signal. The reflected wave is received and assessed by the sensor. In a similar manner as bats employ echolocation, radar determines whether there are objects within its detection range. The IMD-3000 is optimized for detecting hand movements in front of the sensor. Interference such as a passing car or raindrops does not cause detections.

The system is installed in a parking ticket machine. A little symbol indicates that contactless technology is integrated and gives users an idea of the area where the function can be triggered. While drivers used to request a ticket by touching a button, they now briefly hold their hand or finger in the same spot where there once was a contact switch. The system then transmits a signal causing a ticket to be printed. Users are spared the need to touch a bacteria-ridden surface.

“The new product bears great potential for the market. In order to conceive a direct drop-in replacement for the push-button principle, we had to meet high requirements, especially in terms of product design. For the first time, we have developed not just the radar front end, but a complete system. Drawing on our experience, we have managed to launch a state-of-the-art radar system for a really great price. It boasts a reliable touchless-switch function and is one of the most compact products in our portfolio”, explains Dr Eva Buchkremer, Product Manager at InnoSenT, elaborating on the new radar system.

The radar experts designed the product to take on the task of conventional, mechanical switches. In addition to this function, the developers also focused on user-friendliness. Customers should be able to install, commission, and use the system as effortlessly as possible.

The narrow radar system can thus be easily placed behind covers, housings, or common switches – without compromising the existing product design. With a foam adhesive tape on the antenna side, the IMD-3000 can be attached in a snap. The system is equipped with intelligent signal processing, thus sparing customers additional development work with regard to radar integration. In addition, the product is compatible with a wide range of input voltages, ensuring greater flexibility with its power supply.

To top off the plug & play concept, the IMD-3000 can also be connected using an industry standard JST plug. The system can be configured quickly on site as well. A built-in potentiometer enables the system’s response time to be easily adjusted. Customers are free to combine the ready-for-operation radar system and its output with other technologies, software, or products, such as customer-specific apps.

The IMD-3000 boasts a broad array of potential applications. Thanks to its practical design, the radar system can be deployed almost anywhere where a conventional switch or touchpad is in use.

The product can be used for contactless control purposes in numerous everyday situations, such as switching lights on and off or opening and closing doors. This kind of system is particularly relevant in environments with high hygienic requirements, such as in sanitary or healthcare facilities.

However, changing over to contactless sensors also makes sense in public buildings, at information desks or in means of transport such as trains, where many people press the same switch every day. 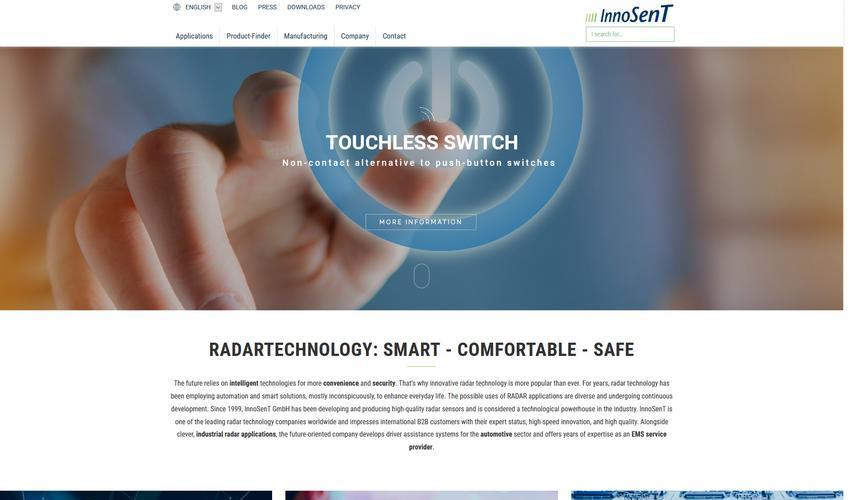 InnoSenT GmbH from Donnersdorf was founded in 1999 and is one of the world's leading companies in the field of radar technology. As a manufacturer and developer, the company supplies the full bandwidth of engineering services - from customer-specific development to series production. Thanks to the strong focus on quality and innovation, InnoSenT GmbH has been following a course to global success for many years.

More information can be found at www.InnoSenT.de