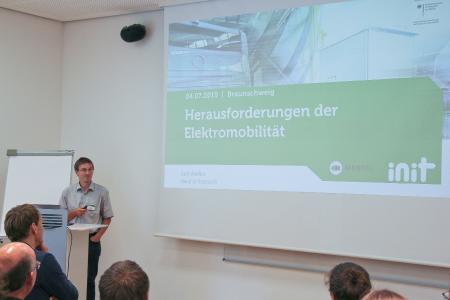 (PresseBox) ( Braunschweig/Karlsruhe, 19-07-17 )
A pleasing finish to a valuable research project: The results of the MENDEL project were announced in a series of presentations and a live demonstration at an event to mark the project’s completion held on 4 July 2019 in Braunschweig.  The MENDEL project – which takes its name from a German acronym that roughly translates to ‘minimizing the load on electrical networks due to charging e-buses’ – was initiated in January 2016 with the objective of reducing investment and operating costs associated with electromobility solutions. Numerous partners from research and industry came together to collaborate on the project, including AVT-Stoye, Fraunhofer IML, GEVAS software, ifak e.V., the German Aerospace Center (DLR), and INIT – which led the consortium. The results are impressive.

In the Smart Grid subproject, the partners developed software solutions to enable smart planning and control of the e-bus power grid. A program was developed to determine the optimal charging infrastructure for opportunity charging (charging en route) in a bus network by analyzing infrastructure data from the electricity provider and schedule information. Another program builds on this to then optimize vehicle routes and blocks and scheduling of charges. The allotted charging time can also be adapted ad-hoc where required. For example, if the Intermodal Transport Control System (ITCS) has logged a critically low charge, it is possible to extend its charging break at a given stop. The charging break can also be shortened to reduce the network load if the charge level is high.

The ITS subproject focused on reducing variable operating costs. Significant savings can be made by reducing energy-intensive starting procedures. To this end, a central public transport prioritization system has been developed that takes charge levels and planned charging times into account. This is enabled by the ITCS’s backend-to-backend connection to the new CCALL component in the local authority’s traffic management system, which manages central registration and prioritization. This makes it possible to control traffic lights in real time to take account for data coming from public transport systems and specific e-buses in particular, e.g. current state of charge, delays, and occupancy rates. In concrete terms, it means that an e-bus with a critical state of charge, for example, is given traffic signal priority to get it through intersections as quickly as possible. The on-board computer also provides the driver with precise real-time information on the distance to the next traffic light and predicts when the lights will next turn green.

At the same time, a smartphone app allows transport companies from surrounding regions to use public transport prioritization systems when they enter a city where these systems exist.

The software created in this subproject was set up in the DLR’s Application Platform for Intelligent Mobility (AIM) test environment and successfully trialed in the Braunschweig urban area. Visitors were able to watch a live demonstration of the software at the event. The onlookers were impressed by the software prototypes used alongside the successful integration of Smart Grid and ITS components to form a cohesive system.

Particular attention was paid to the interfaces during the development of all software prototypes. Where possible, the partners used standard interfaces, or expanded them to incorporate e-mobility-related data.

INIT’s R&D manager, Manuel Quinting, believes the intense three-and-a-half year collaboration has paid off: “MENDEL has shown how information and communications and network technology will allow the large electric bus fleets of tomorrow to be run reliably and economically.”

As a worldwide leading supplier of integrated planning, dispatching, telematics and ticketing systems for buses and trains, INIT has been assisting transport companies in making public transport more attractive, faster and more efficient for more than 35 years. Today, more than 700 customers rely on INIT´s innovative hard- and software solutions.

This creates a solution that covers the complete production process of public transport providing more efficiency and enhanced service quality.

INIT products are recognized for their state-of-the-art technology and may be deployed stand alone or integrated into an intelligent overall system tailor-made for the specific needs of the individual customer. Also a step-by-step extension of the system is possible.