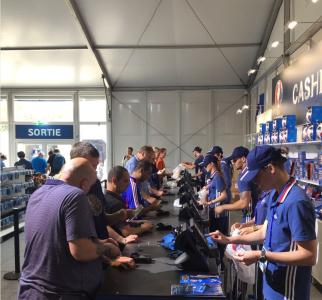 (PresseBox) ( Ratingen, 16-06-16 )
Renewing a successful partnership first established for the London Olympics in 2012, Ingenico Group and Bleep have once again teamed up to provide payment services at the pop-up stores at the 2016 European Football Championship this summer in France.

With 50 pop-up stores in 10 locations across France including Nice, Marseille, Lyon, Toulouse, Bordeaux, Saint-Etienne, Lille, Lens, and two stadiums in Paris including Stade de France. The organisers needed a robust, reliable and secure way of taking card and cash payments from the expected 2.5m visiting fans from around Europe.

Having developed the technologies to eliminate single points of failure for the London Olympics in 2012, the Bleep/Ingenico Pop-up Point of Sale (POS) solution proved capable of handling large transaction volumes and enabling visitors to use their cards safely and efficiently when purchasing the London Olympic merchandise.

John Wellman, Founder and CEO of Bleep, reveals the design behind the systems; "The British Olympic Committee, card sponsor and acquirers needed a fast, secure, reliable and easy to use POS system to support very high peak volume demands and to make sure there were no embarrassing moments where fans could be left unable to buy their valued souvenirs and officially branded merchandise. To do this, we had to build a system from the ground up that was fast to deploy and without any single point of failure that would impact anything other than a single point of sale. Our solution was so well matched to the task that it has led to us providing this service at the European Football Championships in France this year."

The Pop-up POS system, based on a tried and tested combination of Bleep's Award Winning POS system and Ingenico's market-leading card payment terminals, can be installed from the ground up in just a few days. This is then combined with in-field support and training provided by Bleep for each of the 10 sites through-out the duration of event, until the Euro 2016 final on the 10th July. Millions of fans are expected to buy official Euro 2016 merchandise at special stores including the superstore set-up near the Eiffel Tower and just around the corner from Ingenico HQ in Paris.

Ian Benn, Ingenico's Managing Director for Northern Europe, outlines the importance of collaboration in supporting partners such as Bleep, "Bleep is a specialist in Pop-up POS. Their Ingenico-based solution proved itself at the London Olympics and at many other sporting and music events across the world. Bleep has been very smart in designing a solution that is a perfect match for this type of high profile event. Ingenico Group strongly values partners like Bleep that build on the market-leading performance of the Ingenico card terminal range with their own innovative and customer-focused solutions and we look forward to extending this partnership with Bleep further during this summer's big sporting events."

Simply put, Bleep UK PLC is one of the only companies in the UK which design and manufacture its own EPOS terminals. Bleep was founded in 1981 and designs, develops, manufactures and supports Point of Sale equipment and software applications for the retail and hospitality industries. Bleep products are recognised throughout the world for innovation, quality and performance, testament to the experience we have gained servicing these industries. Our client list is very impressive, with over 25,000 installations in the UK, with our attention to product reliability and customer support ensuring our user base continues to increase year on year.

Ingenico Group (Euronext: FR0000125346 - ING) is the global leader in seamless payment, providing smart, trusted and secure solutions to empower commerce across all channels, in-store, online and mobile. With the world's largest payment acceptance network, we deliver secure payment solutions with a local, national and international scope. We are the trusted world-class partner for financial institutions and retailers, from small merchants to several of the world's best known global brands. Our solutions enable merchants to simplify payment and deliver their brand promise. Learn more at: