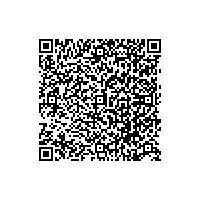 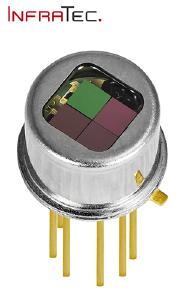 (PresseBox) ( Dresden, 17-05-22 )
Pyroelectric detectors in current mode have been the state-of-the-art for a long time. Anyone looking for miniaturised multi channel detectors with this operating mode will come across far fewer offers, however. The new LRM-284 from InfraTec is setting new standards in this segment.

With the TO39 housing it externally resembles its pendant in voltage mode, the LRM-254. When looking inside, the two double-operational amplifiers enabling the current mode first stand out. Since it is a single supply detector, an analyser with low power consumption can be designed – a fact which particularly speaks for the operation of the detector in portable devices.

Additional significant differences between both quad channel detectors are demonstrated when comparing the performance. Signal changes will appear faster with the LRM-284 and thus the responding behaviour is more dynamic. At the same time, the signal voltage generated in the process is considerably higher. Consequently, the circuit design can be simplified and the detector becomes more resilient against disturbances, which makes the solution of the measuring task significantly easier. The higher signal levels also support the easy integration of the detector into measuring modules.

One step ahead of competitors
Other performance parameters also stand out, particularly when one consider existing detectors on the market as a reference. The Field of View (FOV) is approximately twice as large. Consequently, much more infrared radiation impinges on the sensor elements whereby the signal-to-noise ratio improves accordingly. With regard to the specific detectivity, the advantage over other products offered is even larger. The value surpasses previously typical performance parameters by three-fold.

Resilient and powerful
Apart from the advantages, whose origin lies in current mode, the LRM-284 combines all qualities that distinguish a PYROMID® multi channel detector. The aperture of the TO39 housing is (5 × 5) mm2. A robust central window in the cap made of silicon for example, can even be soldered for complete hermetic sealing.

Inside the detector are the (2 × 2) mm2 large channel filters, which have an additional cost-saving effect when compared with other detectors of their performance class due to their smaller surface area. They are shielded from mechanical stress or from other stresses of harsh environments. Due to the compact stack design, the channel filters move closer to the pyroelectric elements. This reduced distance and the central window integrated in the detector cap are two of the factors that ensure maximum optical performance and allow the LRM-284 to convince due to its high performance. The thermally compensated detector has been designed primarily for applications of industrial and medical gas sensors.

The InfraTec infrared sensor and measuring technology company was founded in 1991 and has its headquarters in Dresden, Germany. The privately held company employs more than 200 employees and has its own design, manufacturing and distribution capabilities.

Infrared sensors, with electrically tunable filters based on MOEMS, count among the products of the infrared sensor division, next to spectrally mono and multi channel infrared detectors. These detectors can be used in gas analysis, fire and flame sensor technology and spectroscopy.

With its Infrared Measurement business unit, InfraTec is one of the leading suppliers of commercial thermal imaging technology. In addition to the high-end camera series ImageIR® and the VarioCAM® High Definition series, InfraTec offers turnkey thermographic automation solutions.