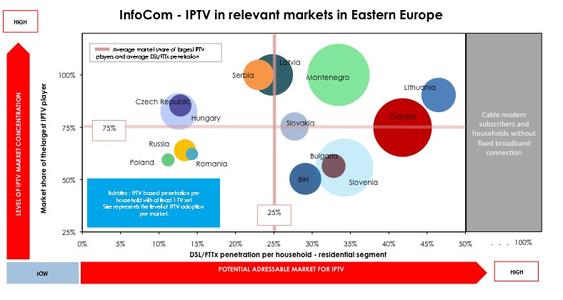 (PresseBox) ( Stuttgart, 14-04-03 )
Stuttgart, Germany — If excluding some countries — Croatia, Montenegro and Slovenia — IPTV adoption in the Eastern European markets is still very low, attracting only between 1% and 14% of the households, with Romania, Poland and Russia with the smallest subscriber base. Apart from the strong foothold of CaTV and satellite TV, the sluggish IPTV take-up can be explained with the still low broadband penetration of DSL and FTTx, which limits the poten-tial target market for IPTV.

In Croatia and Slovenia for instance, thanks to a relatively high DSL and FTTx penetration, IPTV also benefited from the terrestrial analogue switchover as IPTV operators were able to win those households looking for digital TV alternatives instead of directly migrating to DTT.
In terms of operator strategies, in an effort to enlarge their sales channels, some carriers im-plement a white label model. In Hungary, for instance, Magyar Telekom resells its IPTV offer via its own ISPs as a white label service where the ISPs market the offer under their own brand bundled with their broadband offer. In the Czech Republic, HDD follows a similar model but, not having own infrastructure, it only caters to the various ISPs: HDD is basically in-charge of forging partnerships for content and securing the broadcasting license from the regulator.

This IPTV-white-label model could find interest also in some Western European countries in markets characterised by several fibre providers — local or city carriers, local utility companies, community or municipal initiatives — that, though, lack scale and expertise to develop their own ISP/IPTV service. Additionally, this solution is able to support TV take-up in underserved communities where players are unable to offer TV due to limited broadband coverage. As a matter of fact, the white label model is gathering some interest also from other TV platforms. Telenor, for instance, is planning to offer a white label solution for its DTH/satellite TV platform in Bulgaria. In Brazil, Algar Telecom, holding a national satellite TV license, has launched its “ISP TV” service, making its content available to ISPs that operate in small communities: over 20 ISPs are reselling Algar’s satellite TV service and the provider plans to launch a wholesale IPTV in 2014.

Similarly to Western Europe, TV markets in Eastern Europe are expected to consolidate sub-stantially. Indeed, it has already started with the merger of Cyfra+ and “n” in Poland and the acquisition of Akado by ER Telecom (July 2013) – the two of the most significant CaTV players in Russia. Latest examples involve Vipnet’s (a CaTV, IPTV and satellite TV provider in Croatia) recently approved acquisition of three local CaTV providers.

About this extract: This extract in based on an article published on TS&T – Telecom Strategies & Trends, InfoCom’s highly analytical telecoms publication. This ejournal provides in-depth articles on a wide variety of compelling innovative topics. Each issue contains up-to date rigorous analysis. TS&T is available as an annual on-line subscription providing 24 issues throughout the whole year. If you are interested in this publication, do not hesitate to get in contact with us. Talk to us. We listen.

Wer auf Samba als Active-Directory-Domänencontroller setzt, kann dort auch Gruppenrichtlinien verwalten und diese auf Windows-Clients umsetzen. Der Artikel zeigt wie das geht, und wie auch mit Linux-Domänencontrollern Gruppenrichtlinien genutzt werden können. read more
The publisher indicated in each case is solely responsible for the press releases above, the event or job offer displayed, and the image and sound material used (see company info when clicking on image/message title or company info right column). As a rule, the publisher is also the author of the press releases and the attached image, sound and information material.
The use of information published here for personal information and editorial processing is generally free of charge. Please clarify any copyright issues with the stated publisher before further use. In the event of publication, please send a specimen copy to service@pressebox.de.