InfoCom shows how opportunities outweigh the challenges ahead for Thai mobile operators. 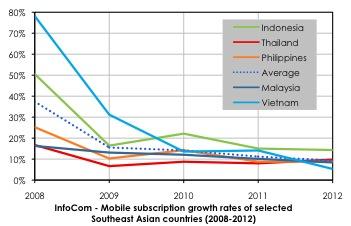 (PresseBox) ( Stuttgart, 13-10-15 )
Stuttgart, Germany; Manila, Philippines — After the auction planned for September 2014 for 1 800 MHz spectrum, InfoCom expects the Thai mobile market to expand rapidly in the follow-ing five years. The evolution will involve more the service side, as the already high mobile penetration rate in the country will dictate the operators to focus increasingly on enticing their subscribers to migrate to 3G and 4G packages to generate additional revenue streams. The additional network capacity and the impending 4G auction in 2014 will enable the op-erators to match the demand for mobile services requiring higher bandwidths as high-definition voice and video services.

The new auction setup is also a more favourable market scheme for mobile operators than in the past. The framework, in fact, does not foresee a revenue-sharing agreement that requires to remit about 30% of service revenues to the state-owned enterprises. This frees more invest-ments to network upgrades and service improvements and will positively impact the KPIs of the mobile providers in the long-run.

While this scenario promises opportunities and is potentially a rosier outlook, mobile operators are expected to face stiff regulations to keep mobile service prices accessible to the masses, in line with the government’s initiatives to increase mobile device usage (e.g. the one tablet per child program). In the past, the regulator NBTC has already ordered operators to reduce tariffs as well as interconnection charges. Thus, considering the increasing level of competition, Thai ARPU levels will be probably negatively impacted.

To mitigate the ARPU erosion, harnessing their newly acquired mobile capacities, mobile op-erators will have to diversify their service portfolio, with offers of HD voice or video, M2M ser-vices, Internet surfing. Additionally, improving customer care and post-sales service will sup-port subscriber acquisition and retention strategies. Operators currently can circumvent the impact of 3G price regulation by launching 4G mobile services based on the 2100 MHz spec-trum, as the carrier True in selected areas in Bangkok, since April 2013. So far, price regulation has addressed 3G services only, although the possibility of extending it to 4G hinges upon the success of the mobile spectrum auction in late-2014.

In this changing mobile landscape, state-owned operators CAT and TOT are expected to in-creasingly profile as wholesale mobile providers and focus more on developing their fixed line networks. TOT, for instance, froze its 3G expansion to focus on ramping-up its Wi-Fi deploy-ments, alongside its plan to deploy FTTH. Meanwhile, CAT is positioning as a host network pro-vider, accommodating services for five MVNOs.

Im zweiten Teil unserer Reihe zum Verbessern der Leistung von Domänencontrollern, zeigen wir weitere Tipps, wie bspw. die richtige Positionierung des globalen Katalogs und die Verbesserung der LDAP-Anbindung. read more
The publisher indicated in each case is solely responsible for the press releases above, the event or job offer displayed, and the image and sound material used (see company info when clicking on image/message title or company info right column). As a rule, the publisher is also the author of the press releases and the attached image, sound and information material.
The use of information published here for personal information and editorial processing is generally free of charge. Please clarify any copyright issues with the stated publisher before further use. In the event of publication, please send a specimen copy to service@pressebox.de.