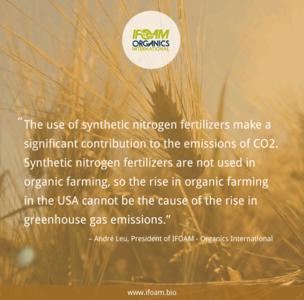 (PresseBox) ( Bonn, 15-08-05 )
Response to the article published in the mail online on the paper 'Does certified organic farming reduce greenhouse gas emissions from agricultural production?' The paper presents no scientific evidence that organic farms put out more greenhouse gases than other farming systems and uses unfounded assumptions to form conclusions. The published peer-reviewed science shows that these assumptions and conclusions are clearly wrong.

The simplistic analysis concludes that because there has been an increase in the amount of acres of organic farming in the US and an increase in the amount of greenhouse gases from farming in the US, organic agriculture increases greenhouse gases. Correlation does not prove causation. Most correlations are coincidences. Causation needs to be proved to show that the correlation is not a coincidence. The paper offers no proof of causation; only data-free assumptions.

It would be more logical to use the same methodology to show that the rise in GMO farming in the US correlates with the increase in greenhouse gases from farming; given that GMO farming now comprises substantial part of US production while organic farming is only one percent.

One of the data-free assumptions in the paper is that the increase in large-scale organic farms is contributing to the increase in greenhouse gases because of the need for machinery.

A peer reviewed scientific study of the Rodale Farming Systems Trial, (in the USA) a long-term comparison trial of conventional and organic systems, found that the organic systems use less fossil fuels and emit 30% less greenhouse gases. (Pimentel et al. 2005)

The Rodale Institute's organic rotational no-till system can reduce the amount of fossil fuels needed to produce each no-till crop in the rotation by up to 75 per cent compared to standard-tilled organic crops. (LaSalle and Hepperly 2008)

Furthermore, the majority of greenhouse gases in farming come from the use of nitrogen fertilizers, not from farm machinery emissions. (Pimentel et al. 2005) Synthetic chemical fertilisers are significant contributors to climate change in terms of the energy used to manufacture them and their contribution to nitrous oxide (N2O) and methane (CH4).

The biggest contributor to human-produced N2O pollution is the use of synthetic nitrogen fertilisers such as urea and ammonium nitrate in agriculture. The contribution of nitrogen fertilizers is even higher when all the CO2 and N2O that is emitted in the production of these energy-intensive fertilisers are included in the totals.

The use of synthetic nitrogen fertilizers in farming also make a significant contribution to the emissions of CO2, the gas that accounts for 80% of all greenhouse gas emissions. Scientists from the University of Illinois analysed the results of a 50-year agricultural trial and found that synthetic nitrogen fertilizer resulted in all the carbon residues from the crop disappearing as well as an average loss of around 10,000 kg of soil carbon per hectare. This is around 36,700 kg of carbon dioxide per hectare on top of the many thousands of kilograms of crop residues that are converted into CO2 every year. (Khan et al 2007, Mulvaney et al 2009)

The researchers found that the higher the application of synthetic nitrogen fertilizer the greater the amount of soil carbon lost as CO2.

In a peer-reviewed meta-analysis study, published by the Proceedings of the National Academy of Sciences (PNAS), that used 41 international comparison trials, including trials in the USA, Gattinger et al. reported that organic systems sequestered 2018.5 Kgs CO2 per hectare per year.

A meta-analysis by Aguilera et al. published in the peer reviewed journal, Agriculture, Ecosystems & Environment, of 24 comparison trials in Mediterranean climates between organic systems and conventional systems found that the organic systems sequestered 3559.9 kg of CO2/ha/yr. The data came from comparison trials from Mediterranean climates in Europe, the USA and Australia and if extrapolated globally would sequester 17.4 gigatonnes (Gt) of CO2.

The Rodale Institute Farming Systems Trial (FST) of organic and conventional cropping systems confirm that organic methods are effective at removing CO2 from the atmosphere and fixing it as organic matter in the soil. (La Salle and Hepperly 2008, Rodale 2011)

The Compost Utilization Trial showed a sequestration rate of 8,220.8 kg of CO2/ha/yr and if extrapolated globally would sequester 40 Gt of CO2. According to the United Nations Environment Programme (UNEP) the estimates of global greenhouse gas emissions in 2010 were 50.1 gigatonnes of carbon dioxide equivalent (Gt CO2e) per year. (UNEP 2013) This means that the widespread scaling up of organic farming systems can make significant contribution to mitigating greenhouse gases and stopping climate change.

The science shows that the correlation is a non-substantive coincidence. There is no scientific basis to say that organic farms contribute to climate change. In fact the opposite is true - organic farming mitigates climate change.

Without policies empowering farmers to grow food AND fight climate change, the Paris agreement will not succeed

Earth To Paris: The Organic Movement Calls for an End to High-emitting Industrial Farming Practices