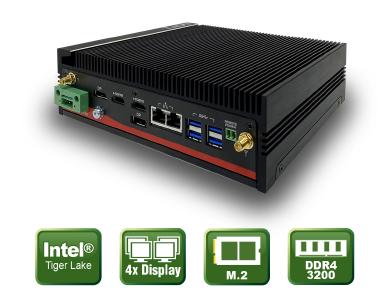 (PresseBox) ( Reutlingen, 21-04-19 )
Behind the designation MP1-11TGS is the first variant of an embedded PC series intended for professional use in industrial environments. The MP series brings improved CPU performance, enhanced graphics performance and additional functions for the use of artificial intelligence. Performance is provided by the embedded PC system using the 11th generation Intel® CoreTM processors, popularly known as Tiger Lake UP3. A total of four processors are available. The entry-level variants are the dual-core processor Intel® Celeron® 6305 with 4MB cache and 1.8GHz clock frequency and Intel® CoreTM i3-1115G4E with 6MB cache and 2.2GHz base clock and 3.9GHz turbo clock. In addition, a version with Intel® CoreTM i5-1145G7E, a quad-core processor with 8MB cache and 1.5GHz base clock as well as 4.1GHz turbo clock, is available for demanding computing tasks. For high-end computing applications, the Intel® CoreTM i7-1185G7E provides four processor cores, 12MB cache and a base clock of 1.8GHz and a turbo clock of 4.4GHz sufficient computing power.

The working memory with its 3200MHz also offers a performance increase to the current models with 2666MHz. In total, the system can be equipped with up to 32GB DDR4 SO-DIMM RAM.  All four processor variants have the output of up to four simultaneous video signals in common. The two entry-level variants are equipped with Intel® UHD processor graphics, whereas the high-end versions use the improved Intel® Iris® Xe graphics unit. The Tiger Lake UP3 platform has also been enhanced with AI and Deep Learning functionality, which can be further accelerated using Intel® Deep Learning Boost. The MP1-11TGS series offers a very good overall computing performance through this combination of CPU, GPU and AI functionalities, and can thus easily accomplish tasks that require AI functions.

In terms of interfaces, the MP1-11TGS offer their users a Gigabit network interface with Intel® i219-LM IC and one with Intel® i210-AT IC as standard. Furthermore, four USB 3.1 Gen.2, two USB2.0, three RS-232, one RS-232/422/485 and one audio combo jack. Two additional network interfaces can be optionally equipped and led out of the case. Monitors can be connected to the two DisplayPorts V1.4 as well as the two HDMI ports V2.0b of the MP1-11TGS series. Resolutions of up to 4096x2160 are possible depending on the video output. The MP1-11TGS can be operated without a fan and, depending on the processor, can withstand ambient temperatures of -40 °C up to 70 °C or -40 °C to 60 °C depending on the processor. With a voltage range of 8 to 24 volts DC, the MP1 series covers a common range. Depending on the requirements, the systems can be mounted frontally or sideways using wall brackets.

Industrial board for the IoT